Jesmyn Ward has become one of my new favorite writers. Her work is eloquent and powerful, and she deserves all the awards and accolades she’s received lately for her latest book, Sing, Unburied, Sing. Edited from Goodreads:

Jojo and his toddler sister, Kayla, live with their grandparents, Mam and Pop, and the occasional presence of their drug-addicted mother, Leonie, on a farm on the Gulf Coast of Mississippi. Leonie is simultaneously tormented and comforted by visions of her dead brother, which only come to her when she’s high; Mam is dying of cancer; and quiet, steady Pop tries to run the household and teach Jojo how to be a man. When Michael, the white father of Leonie’s children, is released from prison, she packs her kids and a friend into her car and sets out across the state for Parchman farm, the Mississippi State Penitentiary, on a journey rife with danger and promise.

I initially had trouble getting into this book. I agree with some of the criticisms I’ve seen online—it’s a slow-moving burn, too much vomit (sorry, ever-so-mild spoiler), and I wasn’t entirely convinced of the ghosts until about halfway through. While an alternating first-person narrative doesn’t typically bother me, I found Jojo and Leonie’s voices a little too similar in tone. It too me far too long to get through; I started in October and didn’t read it at all in November (I was traveling… I barely read anything when visiting family!)

Ward’s esoteric, delicate writing as well as an excellent ending that made everything click for me ultimately made Sing, Unburied, Sing one of the best books I read this year. She builds tension describes situations and scenery so vividly you can easily become wrapped up in the story (at least, I did when I finally committed and settled into reading the rest of it this month). The characters were heartbreaking in their struggles and suffering, from Leonie’s addictions (to drugs and Michael) to Jojo’s protective instincts and loss of innocence, to Pop’s burdens as patriarch of this family and as an older Southern black man with his own personal demons. Ward powerfully illustrates many of America’s ills (specifically those that have historically and disproportionately effected black Americans)—poverty, parental neglect, disease, racism, incarceration, addiction, premature death, violence—with a multi-generational, mixed-race family in the deep South and a good dose of magical realism. It’s a Southern Gothic tragedy, one that is all too typical (ghosts notwithstanding) and familiar these days. 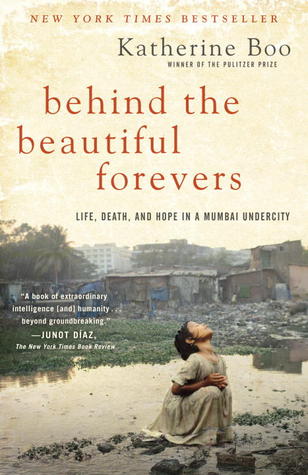 Two years after it first came out I finally got around to reading Behind the Beautiful Forevers by Katherine Boo, a fascinating, heartbreaking exposé of a Mumbai slum and its residents. Edited from Goodreads:

A bewildering age of global change and inequality is made human through the dramatic story of families striving toward a better life in Annawadi, a makeshift settlement in the shadow of luxury hotels near the Mumbai airport. With intelligence, humor, and deep insight into what connects people to one another in an era of tumultuous change, Behind the Beautiful Forevers, based on years of uncompromising reporting, carries the reader headlong into one of the twenty-first century’s hidden worlds—and into the hearts of families impossible to forget.

I’m embarrassed this took me so long to get to, and then so long to read. I think I was just too busy this past month, because a book like this is right up my alley and wouldn’t normally take me so long. When I was able to catch moments with this over the past month I was spellbound. Boo crafts this narrative non-fiction with compassion, grace and objectivity, exposing what life is like for these hardworking individuals at the bottom of the ladder in one of the world’s wealthiest cities, taking into account social and economic context. Annawadi could be any slum in any large city in the world with substantial economic inequality.

The families on these pages came alive to me, especially the children. Education is basically nonexistent. They compete with each other in garbage trading to scrape together a little money for their families. They endure beatings and witness suicides, often contemplating it themselves. But some we learn about in Beautiful Forevers are tenacious and hopeful, striving for a better life.

The struggles of Annawadi’s residents are wide-ranging, from unemployment to addiction to disease to suicides to corrupt police and government to fear of their homes being bulldozed. The fact that they are fundamentally no different from anyone else—needing to provide for their families, hopes and dreams for a better future for their children—is made crystal clear. Beautiful Forevers is a powerful, tragic, affective glimpse at the daily lives of these spirited people in abject poverty.