Hosted by Kim (Sophisticated Dorkiness), Katie (Doing Dewey), Leslie (Regular Rumination), and Rebecca (I’m Lost in Books), Non-Fiction November is a challenge to spend the month exclusively reading and writing about non-fiction. Each week there is a discussion topic, and the hosts also have a couple of readalongs going for the event.

What does “diversity” in books mean to you? Does it refer to book’s location or subject matter? Or is it the author’s nationality or background?
This is tough because it has so many meanings to everyone. I think it’s pretty much anything that expands your mind or educates you. And I know it’s “Non-Fiction November,” but this can apply to fiction, too! But yes I do believe diversity can apply to setting, subject, author’s gender/nationality/sexuality/race/etc.

What countries/cultures do you enjoy or read about most in your non-fiction?Admittedly, I’ve mostly read non-fiction about the United States. Currently I’m (still) reading George Packer’s The Unwinding, about how American Democracy has spiraled away from serving the people over the last 40 years. I probably need to expand my horizons on reading about non-American cultures in non-fiction—I can only think of a couple off the top of my head that I’ve read. Otherwise, I love reading about true crime, food, war, music, sports, and harrowing, tragic, and/or adventuresome experiences.

What countries/cultures would you like non-fiction recommendations for?
I’m sure I’m woefully under-read on non-fiction books about countries and cultures outside the United States, at least in non-fiction. Reading Rohinton Mistry’s A Fine Balance struck a curiosity about Indian culture, so I have Katherine Boo’s Behind the Beautiful Forevers on my TBR. I would love to read more about Ireland—I’ve pretty much only read Frank McCourt’s books.

What kind of books besides different countries/cultures do you think of as books of diversity?
Race, age, gender, either in subject matter or the author’s own… For example, I just read Roxane Gay’s Bad Feminist and while I can identify with many of her views from the standpoint of a fellow woman, it really opened my eyes to how a person who is not white could interpret pieces from the entertainment industry and other parts of American culture, which is so obviously white-dominant. I started tracking my reading more seriously this year and found that a majority of the books I read are by men, too, just by happenstance—when I’m choosing a book I primarily gravitate towards the subject matter or story, not the author’s gender/race/age/whatever. So, I’ve been making a concerted effort to read more books by women, just to be more conscious of that gender gap. I realized after reading Gay’s book that I would like to add a column on my track sheet for writers who are not white and not American, to see how globally I’m reading as well.

What do you think about diversity in books, fiction or non-fiction?

Hosted by Kim (Sophisticated Dorkiness), Katie (Doing Dewey), Leslie (Regular Rumination), and Becca (I’m Lost in Books), Non-Fiction November is a challenge to spend the month exclusively reading and writing about non-fiction. Each week there is a discussion topic, and the hosts also have a couple of readalongs going for the event.

Since the centennial of World War I started this year and we have the National WWI Museum here in Kansas City, we’ve seen a lot of programming (art and history exhibits, library readalongs, concerts featuring music about or from the war eras, etc.) around here commemorating this war. And between this at home and my recent visit to Pearl Harbor in Honolulu, this subject has been on my mind a bit lately. The WWI books I’ve read are fewer and mostly fiction (All Quiet on the Western Front, etc.) so my non-fiction recommendations on the subject are about WWII, Vietnam, and current:

Unbroken by Laura Hillenbrand — An incredible, adventurous, harrowing journey for Olympic runner and WWII lieutenant Louis Zamperini, soon to be released as a movie.

Hiroshima by John Hersey — A sober account of six survivors of the atomic bombing of Hiroshima, Japan on August 6, 1945. Equal parts sad, gruesome, and gripping.

The Diary of a Young Girl by Anne Frank — Inspiring in the midst of the horrors of war, especially Anne’s words, “I keep my ideals, because in spite of everything I still believe people are really good at heart.”

Night by Elie Wiesel — An intense, chilling account of life in a Nazi concentration camp. Wiesel doesn’t shock with gory details necessarily, but the tenacious humanity of the prisoners and Wiesel’s relationship with his father are moving.

A Rumor of War by Philip Caputo — I read this years ago, but it’s always been one I would like to reread eventually. A decade after his 16-month tour of Vietnam, Caputo wrote this memoir about his devastating experiences, both physical and emotional.

Voices from Vietnam edited by Michael Stevens — A compilation of letters and diary entries from Wisconsin soldiers during the Vietnam War. A letter from my uncle to my grandmother is included in the collection.

Drift by Rachel Maddow — An intelligent, accessible account of our nation’s gradual shift into a state of near-constant war, despite the very real human and financial costs, starting from the Vietnam War through the recent wars in Afghanistan and Iraq.

The next war-related book on my list to read is Flags for our Fathers by James Bradley, about the author’s father and his fellow soldiers raising the flag during the WWII battle of Iwo Jima, captured in that iconic photograph. My dad bought me a copy from the Pearl Harbor gift shop when we visited the site during our Hawaii vacation in August. It’s been on my list for years, knowing the Wisconsin ties—the Bradley family is from the same up-north Wisconsin town as my dad’s family.

This weekend I went up to my beloved Wisconsin for the Green Bay Packers game against Chicago. I got to visit with family and spend time with my darling nephew, too! For reading, I am happy to continue on with Non-Fiction November: 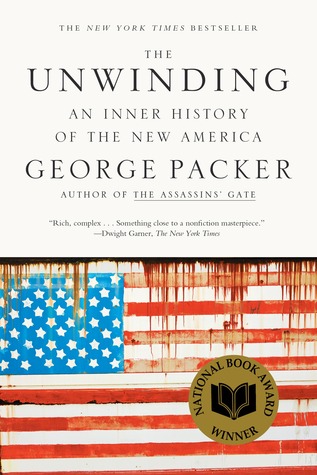 I was disappointed with the mid-term election last Tuesday, to put it politely. I was weirdly shocked and not shocked at all by the results, but not wholly disheartened, as many progressive policies were passed by voters. I’m sure you guys know all about it and I don’t want to get into a heated debate here, these are just my personal feelings and I don’t expect to change anyone’s minds. So, when deciding on the next non-fiction book to read I thought what would be better and more timely than The Unwinding: An Inner History of the New America by George Packer?

American democracy is beset by a sense of crisis. Seismic shifts during a single generation have created a country of winners and losers, allowing unprecedented freedom while rending the social contract, driving the political system to the verge of breakdown, and setting citizens adrift to find new paths forward. [Source]

Over the weekend I started (and finished) Yes Please by Amy Poehler. So incredibly awesome. I LOVED this book, I devoured it almost entirely just on Saturday. I am sure I’ll be recommending this one to everyone, and I hope one day I’ll get around to listening to it on audio. I just didn’t want it to end!

After Yes Please, and continuing with Non-Fiction November, I decided to start the other celebrity memoir I recently purchased, As You Wish by Cary Elwes, “inconceivable tales from the making of The Princess Bride” written by Westley himself. So far it has been a really fun read, making me want to go back and watch the movie right away when I finish this one. I ended up reading HALF of it on Sunday! (Could have possibly read the whole thing, if I hadn’t had some other work to do.) I was on a real reading binge this weekend and it was great.

Hosted by Kim (Sophisticated Dorkiness), Katie (Doing Dewey), Leslie (Regular Rumination), and Becca (I’m Lost in Books), Non-Fiction November is a challenge to spend the month exclusively reading and writing about non-fiction. Each week there is a discussion topic, and the hosts also have a couple of readalongs going for the event.

Week 1 topic, November 3–7 (hosted by Kim, Sophisticated Dorkiness)
Your Year in Nonfiction: Take a look back at your year of non-fiction and reflect on the following questions:

What was your favorite non-fiction read of the year?
Of the 18 non-fiction books I read this year (so far!) my favorite is Helter Skelter by Vincent Bugliosi. I couldn’t put it down, couldn’t stop thinking about it, couldn’t stop talking about it. A VERY close second is the biography of Vince Lombardi by David Maraniss, When Pride Still Mattered. Every Green Bay Packers fan should read it, as well as all fans of football.

What non-fiction book have you recommended the most?
I just finished Amy Poehler’s Yes Please this morning and can tell I’ll be recommending that shizz all over the place!

What is one topic or type of non-fiction you haven’t read enough of yet?
Hmm. My tastes are pretty broad, I think, when it comes to non-fiction topic-wise. But I’d say I don’t have much experience reading essay collections, letters/journals, or argumentative non-fiction. I don’t necessarily feel like I need to make myself read these forms, I’m not purposefully avoiding them—it’s all about the subject matter intriguing me.

What are you hoping to get out of participating in Non-Fiction November?
I’d love to get through more non-fiction books on my bookshelf that I’ve had for a while but neglected for whatever reason:

On my list for Non-Fiction November. No promises I'll get to all of them! #reading pic.twitter.com/AviZzycxwt

I also have about 5–6 more on my shelf not pictured there, and about 7 non-fiction ebooks on my iPad. Maybe that would be a good goal—reading ONE ebook this month! I’m terrible about actually reading ebooks. I just like the feel of a paper book in my hands, I dunno.

Otherwise, I just look forward to reading other bloggers’ responses to the prompts and learning about some new non-fiction titles to check out!

One note: I’m not limiting myself to non-fiction this month… hopefully that’s not cheating! But I started a fiction audiobook (The Girl with All the Gifts) and it’s from the library, so I want to get through it before it’s due back! Besides that I definitely have enough to get me through the rest of November with all non-fiction. Also, I have been an on-again, off-again drop-in member of a non-fiction book group at my local library, but have had conflicts on the nights it meets for discussion lately. Boo! Maybe I can join back up again in 2015.

Are you reading any non-fiction this month?