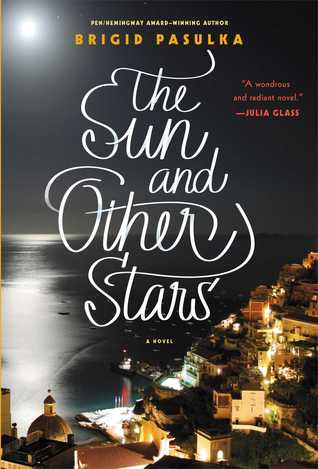 Earlier this month I won an ARC of The Sun and Other Stars by Brigid Pasulka from the Goodreads First Reads Giveaway program. It arrived in my mailbox on the “official” day of release! From Goodreads:

After losing his brother and mother within a year, twenty-two-year-old Etto finds himself adrift in his hometown, where every man’s life revolves around soccer, except for his. Frustrated and lonely, Etto is faced with the seemingly impossible prospect of cobbling together the remaining pieces of his life, including his mostly nonexistent relationship with his father, the town butcher.

Things begin to change for Etto when Yuri Fil, a scandal-ridden Ukrainian soccer star and his tough-love sister, Zhuki, arrive in town, and sweep him into their universe of soccer, celebrity, laughter, and fierce loyalty. Under their influence, Etto begins to reconstruct his relationship with his father and learns a few life lessons: that perhaps the game of soccer isn’t just a waste of time—and that San Benedetto, his father, love, and life itself might have more to offer him than he ever believed possible.

I feel about half-and-half on The Sun and Other Stars—I half really enjoyed it and half slogged. I went in with expectations that I could read it pretty quickly, and then when I ended up with less time to read last week than I thought I’d have, I felt like it was taking forever to get through. So pacing was a little rough for me, but that could have just be me and my (lack of) free time.

The beginning of the book was great and engaging; I felt transported to sleepy little San Benedetto right away and appreciated Etto’s voice and felt empathy for him in his losses. I loved the San Benedetto locals, too—I thought they were all full of character and interesting back stories (however brief). Setting The Sun and Other Stars in a little seaside Italian resort town is just about perfect, too.San Benedetto really becomes a character itself, as does calcio (fútbol, soccer). Amusingly, Pasulka pokes at her fellow U.S. Americans that we don’t know soccer, and she pegged me for sure right there. However I’m a sports fan in general so the integration of soccer into the plot and soccer-as-life metaphors worked for me. As you know if you read my blog, we Wisconsinites feel the same about our Green Bay Packers—games are THE social events of the year, the games and team bring the community together, family traditions, etc. I already knew other parts of the world regard soccer and their local teams the same way, and I think Pasulka conveyed this aspect wonderfully.

The book started dragging for me in the second half a bit. Again, could be just due to my having to sneak in just a couple pages at a time here and there and not having a chance to devote a real good chunk of time to it. I was losing my patience with Etto and his increasingly grumpy, rude attitude (that’s how I read it, anyway). And as I’ve said in the past, romances blossoming in stories cool me down really fast, so I think the book started losing me some as Etto and Zhuki begin to really connect. I just didn’t care. Girl plays hard to get, guy loses girl, grand gestures… eh. I was more interested in Etto’s relationships with his father, grandparents, and best friend Fede.

But, lots of people love love stories so don’t let my own feelings sway you if that’s your thing! Some of the statements about dealing with a painful loss of a close loved one are palpable and spot on. The Sun and Other Stars is a very sweet story about family, friends, relationships, community, and working your way through grief and loss and coming out on the other side.