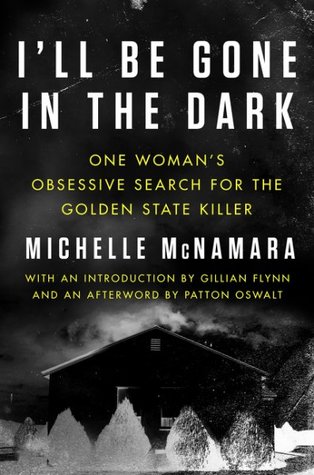 I’d been really looking forward to reading I’ll Be Gone in the Dark by Michelle McNamara since I first heard about it. I’m sure this would have been on my radar anyway even if McNamara hadn’t been married to a celebrity. I bought it the week it was published, and it will definitely be one that I recommend all year to true crime fans. From the book’s jacket:

A masterful true crime account of the Golden State Killer—the elusive serial rapist turned murderer who terrorized California for over a decade—from Michelle McNamara, a gifted journalist who died tragically while still writing and researching her debut book. I’ll Be Gone in the Dark offers a unique snapshot of suburban West Coast America in the 1980s, and a chilling account of the wreckage left behind by a criminal mastermind. It is also a portrait of one woman’s obsession and her unflagging pursuit of the truth, three decades later, in spite of the cost.

I had a little trouble focusing at first on reading this book (my problem at the time, no fault of the author or subject) but I ended up having a cold last week and reading was about all I could concentrate on. I devoured the majority of this one laid up sick in bed in just a couple of days. I have an interest in true crime—read or seen documentaries on Zodiac, Jack the Ripper, etc.—how could I not have heard of this guy before?

I’ll Be Gone in the Dark is meticulously researched and completely immersive—one tip or piece of evidence leads to multiple threads to follow, and just when you think “this is the guy, they’ve got him,” he’s eliminated. I had to keep reminding myself he’s still at large (right now, in 2018), is frightening in itself. Is he still alive? Dead? Imprisoned for something else, but hasn’t had his DNA sampled? He’d be in his mid–late 60s right now. Why did he abruptly stop his reign of terror in 1986? I’m just sickened by the depths of his diabolical actions. The victims and their loved ones deserve justice. After reading this book, I’m confident McNamara’s tireless efforts will have played no small part in his capture.

McNamara was not only a relentless researcher but also a gifted, natural writer. She invited you to experience her process, come along on her frequent trips to the crime scenes, and listen in on her conversations with the victims and professional investigators both past and present. I’m impressed and grateful for the dedication of these officers of the law tirelessly investigating this case, no matter how seemingly fruitless the past few decades. McNamara makes sure that every person is real to you, including the GSK. Her incredible skill at suspenseful writing is illustrated in the way she describes the GSK’s horrific crimes without fetishizing or sensationalizing. You absolutely sense her empathy for the victims and their families, even the investigators whose lives have been consumed by the case, and her intense desire for the GSK to be brought to justice. For McNamara, it became personal—less a writing assignment than a mission.

Michelle McNamara was a brilliant, passionate writer and I was totally swept up in the emotional rollercoaster of her hunt for the Golden State Killer. It’s a thrilling, fascinating, and frustrating read, knowing this monster hasn’t been caught, and so tragic that Michelle died midway through writing it, way too young. I teared up reading the end of her husband’s afterword, and her strong sense of resolve and determination rubbed off on me in her own epilogue to the book, “Letter to an Old Man.” I’ll Be Gone in the Dark is just a really excellent piece of narrative true crime journalism. I don’t usually like to predict so early in the year, but this might end up being one of my best reads of 2018.

2 thoughts on “i’ll be gone in the dark”