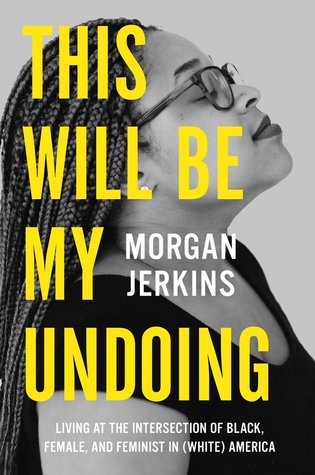 There was a lot of hype surrounding This Will Be My Undoing by Morgan Jerkins before it came out in January, so I put it hold back then and the audiobook came through the library for me this month. Edited from Goodreads:

From one of the fiercest critics writing today, Morgan Jerkins’s highly-anticipated collection of linked essays interweaves her incisive commentary on pop culture, feminism, black history, misogyny, and racism with her own experiences to confront the very real challenges of being a black woman today. Jerkins is only in her twenties, but she has already established herself as an insightful, brutally honest writer who isn’t afraid of tackling tough, controversial subjects. In This Will Be My Undoing, she takes on perhaps one of the most provocative contemporary topics: What does it mean to “be”—to live as, to exist as—a black woman today? This is a book about black women, but it’s necessary reading for all Americans.

I’m on the fence a little bit about this one. Jerkins is a great writer, and has tons of potential for the future. But “controversial” and “brutally honest” are good adjectives for this book. I’m generally not upset by the most common content-triggering topics like sex and violence, but there are a lot here and she goes into great detail, so I guess just be prepared if you decide to read this one. Some of the essays were really good, especially those relating history to present-day black experiences, and those about her childhood. I also enjoyed the essays on Beyoncé’s groundbreaking visual album Lemonade and Michelle Obama.

However—and I completely acknowledge Jerkins’s book is not “for me,” as a white, middle-class, Oregon Trail-generation woman from the Midwest—there are some double standards and generalizations that made me sort of uncomfortable. She stereotypes white women and idealizes Japanese people. As a white woman who does not fit her narrow description of them, I’m just kind of like, well we’re not all rich, coddled, slim, beautiful Trump voters… And as an American living in Asia, I have to say, I really hate the “expat” mindset, which typically manifests itself as either the “white savior” trope or thinking that other countries and cultures exist solely for Americans to “discover” themselves, or something. So while I don’t doubt her interest in Japanese culture, I was bothered by her descriptions of Japan and its people. Remember that viral video a few years ago of a woman silently walking around New York City for hours to demonstrate frequent and unsettling street harassment of women? Jerkins weirdly defends the men in the video, while at the same time taking offense to being catcalled herself? I was confused as there being any difference.

I guess overall I was expecting something more insightful or somehow different, based on the hype and subtitle. Implicit bias exists in everyone. I respect Jerkins for putting it all out there, though, even the private, “shameful” stuff you’re supposedly not supposed to talk about.

2 thoughts on “this will be my undoing”