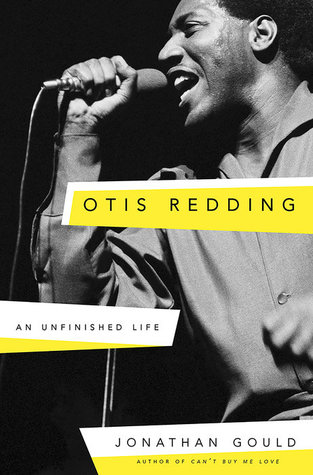 I first heard about Otis Redding: An Unfinished Life by Jonathan Gould when it first came out, close to the 50th anniversary of the 1967 Monterey Pop Festival, at which Redding gave an electrifying, career-high performance. I have it on vinyl and it’s stunning. As a music lover, as a soul music lover, as a Madisonian, I knew I had to read this book. From the book jacket:

Otis Redding remains an immortal presence in the canon of American music on the strength of such classic hits as “(Sittin’ on) The Dock of the Bay,” “I’ve Been Loving You Too Long,” “Try a Little Tenderness,” and “Respect,” a song he wrote and recorded before Aretha Franklin made it her own. As the architect of the distinctly southern, gospel-inflected style of rhythm and blues associated with Stax Records in Memphis, Redding made music that has long served as the gold standard of 1960s soul. Yet an aura of myth and mystery has always surrounded his life, which was tragically cut short at the height of his career by a plane crash in December 1967.

There’s no time in my life when I didn’t know Otis Redding and his music. I don’t remember the first time I heard his voice or his records. My dad is an avid music appreciator and soul music was a ubiquitous presence during my childhood. In fact, “(Sittin’ on) The Dock of the Bay” is a part of the soundtrack of our family history. Funny story: my dad copied down the lyrics and handed it in for a poetry assignment in high school (late 1960s); his old teacher didn’t know the song and my dad got an A! He still “complains” he hasn’t “seen any royalties” once in a while. I love lots of musical genres, but I consistently return to and never tire of soul. I’ve been really loving this recent resurgence, “new” soul, like Sharon Jones, Charles Bradley (RIP both), and all the Daptone Records artists, etc.

Of course, my fascination with Redding goes deeper than simply enjoying his music. The plane he was in crashed into Lake Monona, in my hometown, Madison, Wisconsin. (Here’s an article in The Isthmus noting the 50th anniversary of the crash.) My folks were still teenagers when Redding died, so they hadn’t moved to in Madison yet and weren’t planning on attending his Factory gig of course, but as long as I can remember, my dad has had (a reproduction of) the gig poster hanging in our living room. I eventually got a small copy of my own. I remember when a plaque was erected at the Monona Terrace Convention Center in 1997 in Redding’s memory. I know his connection to Madison is negligible, but it’s nevertheless tragic and real.

Now for the book! I can’t exactly say I was hooked from the start—it took me maybe around 100 pages before something clicked and I couldn’t put it down. This could have been my problem, not the book. I was in a slump when I started reading this at the end of January. But I was absolutely enthralled for the rest of it. I was so excited by everything I was learning, relating facts to my husband at the end of the day. I didn’t realize how badly I’ve been craving to read about music, and of course this particular subject matter is near and dear to me.

Gould’s book is so much more than a biography of Otis Redding. In fact, if you are just looking to learn about the man, you’ll probably be disappointed. What Gould does here is place Redding’s life and career in context of the time, place, and people. Presenting a rich social history of the politics and culture of the South in the 1960s (and prior) gives the reader a deeper understanding and appreciation of where Redding and his music came from, and why his legacy endures and his music resonates fifty years later. You learn about how racial tensions, boundaries, and politics impacted the music business, bands, and artists. You learn a little bit about other notable musicians and their music, like Ray Charles, Sam Cooke, and Aretha Franklin; how Redding’s brand of soul evolved from gospel and blues; about the formation and operation of Stax Records; and how beloved soul artists and famous record companies of the 1960s are all connected. My synapses were firing with each page!

If I have one quibble, I think I would have liked more photos. A few appear at the start of selected chapters. There are descriptions of album cover art, etc., but no accompanying image. BUT—as soon as I thought to myself, oh I wish there were more pics, I realized DUH I can look online and DUH AGAIN should definitely be “listening along” while I read this. There are sooo many great songs and albums mentioned page after page. I spent a lot of my reading time in front of my laptop, concurrently playing videos of Redding’s (and others’) performances and recordings. It became a fantastic, immersive reading experience.

I have no doubt this will be the definitive biography of Otis Redding for the foreseeable future, and is a must-read for anyone interested in 1960s soul music and how popular music and race in America are and have historically been indelibly entwined. I stayed up all night finishing the last few chapters and even though I knew the ending, I still cried reading through the crash. This book gave bold, technicolor life to Redding, as musician and man, for me.