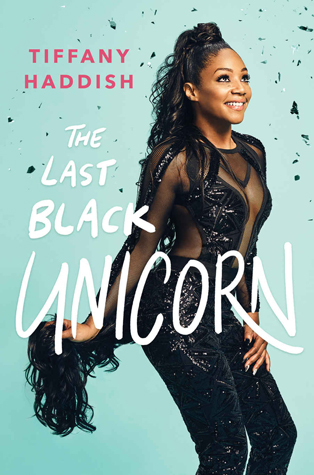 First book of the new year! I was so excited to get The Last Black Unicorn by Tiffany Haddish through through my library app on audio. Edited from Goodreads:

From stand-up comedian, actress, and breakout star of Girls Trip, Tiffany Haddish, comes The Last Black Unicorn, a sidesplitting, hysterical, edgy, and unflinching collection of (extremely) personal essays, as fearless as the author herself.

Growing up in one of the poorest neighborhoods of South Central Los Angeles, Tiffany learned to survive by making people laugh. If she could do that, then her classmates would let her copy their homework, the other foster kids she lived with wouldn’t beat her up, and she might even get a boyfriend. Or at least she could make enough money—as the paid school mascot and in-demand Bar Mitzvah hype woman—to get her hair and nails done, so then she might get a boyfriend. None of that worked (and she’s still single), but it allowed Tiffany to imagine a place for herself where she could do something she loved for a living: comedy.

I admit I never heard of Tiffany Haddish before November, when I was hanging out with my friend in Kansas City and we watched the recent episode of SNL she hosted. She was incredible and it was one of the best episodes of SNL I think I’d seen in a long time. Haddish is sharp and hilarious, and has an interesting perspective on her place in the world as a black woman and as a black woman in comedy.

Experiencing this book on audio with Haddish narrating is definitely the way to go. Her excessive energy and observant nature make her an extremely engaging storyteller. The parts of her life she recounts here are ridiculous, laugh-out-loud funny, sometimes cringe worthy, and sometimes frustrating and serious. Her childhood was bleak, full of neglect, abuse, and disappointments. She has been plagued by abusive, troubled romantic relationships, and encountered plenty of misogyny as a comedian. But through all this, she has retained her willful spirit and remained true to herself.

If I have a minor complaint, it’s that this doesn’t exactly read like a memoir, with the stories sometimes feeling rushed and the structure of the book could be considered choppy. It’s more like a collection of stories from her life rather than a linear narrative. But oftentimes celebrities don’t go into as much depth as you’d like them to in their memoirs. I can see how readers may be sensitive to her handling of a differently abled coworker (about whom she felt positively, but still) and there are some instances of stereotypes about black women in the book. But overall, Haddish is a comedian to watch for sure. She was delightful to listen to and learn more about, and I can’t wait to see Girls Trip! I’m sorry I missed it this summer when it came out!

Listened to audiobook in January 2018.