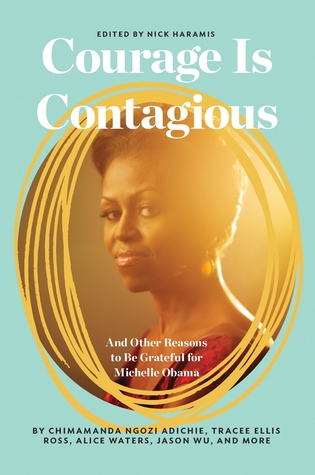 As soon as I saw Courage is Contagious, and Other Reasons to Be Grateful for Michelle Obama come across my Instagram feed I knew I had to read it. Edited from Goodreads:

Michelle Obama’s legacy transcends categorization; her cultural imprint is as nuanced as it is indelible. She used her time in the White House to fight for women, minorities, and health and education advocates. At the same time, her own genre-busting style encouraged others to speak, to engage, even to dress however they wanted. Editor Nicholas Haramis assembles twenty original essays from a stunning array of prize-winning writers, Hollywood stars, celebrity chefs, and politicos who have been moved and influenced by her extraordinary grace in power.

This slim collection was a much-needed uplifting read for me right now. With the clear and present danger the current administration poses to Americans and humanity in general across the globe, it was refreshing to listen to others who are equally inspired by the inimitable Michelle Obama.

Some of the essays were a little too similar to each other in tone and there’s some repetition of well-known Michelle Obama facts and quotes (her bold fashion choices, “When they go low…,” etc.). I wish I would have skipped Lena Dunham’s introduction; I thought it was trite, verging on disrespectful, and I can’t stand her anyway.

There are several stand-out essays to me, though, including those from Chimamanda Ngozi Adichie, Jason Wu, Gabourey Sidibe, Charlamagne tha God, and Issa Rae. The best essays are definitely the two by the ninth-grade girls Adasendis De La Cruz and Laura Camacho, reminding the reader that beyond Mrs. Obama’s tangible accomplishments as first lady, her life-long tenacity and achievements above and beyond her humble origins have shown young people, especially young women of color, that they can accomplish their dreams while still being true to themselves.

Michelle Obama is a national treasure and we’re lucky beyond imagination that she was introduced to us. I really hope she writes a memoir or autobiography someday.

Listened to audiobook in December 2017.