Cancer is the worst. It fucking sucks. I can’t think of one person or one family it hasn’t profoundly effected, including me and mine. It’s a tender subject to me for sure, but I’m interested in absorbing information about it regardless. This year I finally swallowed my hesitation and read two books on cancer that I’ve had my eye on since they came out. 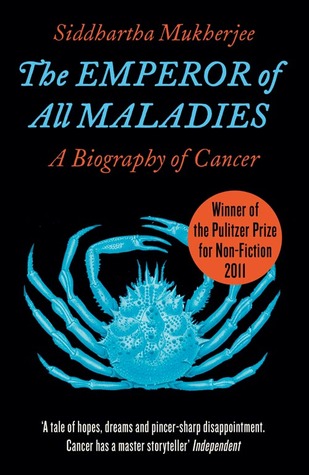 I’ve been wanting to read The Emperor of All Maladies by Siddhartha Mukherjee for a long time, but I was nervous and intimidated to start this book, yes because it’s a chunkster, but also because I was afraid of the medical stuff going over my head and my heart breaking. But, despite some long-winded sections, I was riveted the whole way through. It’s a combination of history, science, politics, and actual patients’ stories, but very readable and engaging. The amount of research here is staggering, and Mukherjee leaves nothing out. I can’t say there are answers here, that’s not the book’s purpose. But I did gain a better understanding of this disease in general, its many iterations, and how it and our responses to it have evolved since its discovery. Cancer is frightening, but centuries-long war between humankind and cancer involves experimentation (some of it truly horrific in the early days), ingenuity, progress, failure, persistence, and hopefully, one day, a cure. [Read in June 2017.]

Paul Kalanithi was on track to being a successful neurosurgeon and married to the love of his life. When he was 36, he was diagnosed with stage IV lung cancer. When Breath Becomes Air is Kalanithi’s account of transforming in an instant from doctor to terminal patient, from someone who has his whole life ahead of him to having virtually no future at all. He died while working on this book. My heart both broke and burst reading this. Kalanithi lays bare all his fears and frustrations about losing his career and facilities, his marriage and relationships with friends and family, and his impending mortality. It’s a deeply personal, raw, insightful, beautiful memoir. More than one passage moved me to tears, but this one especially will stay with me: “‘Will having a newborn distract from the time we have together?’ she asked. ‘Don’t you think saying goodbye to your child will make your death more painful?’ ‘Wouldn’t it be great if it did?’ I said. Lucy and I both felt that life wasn’t about avoiding suffering.” [Read in March 2017.]