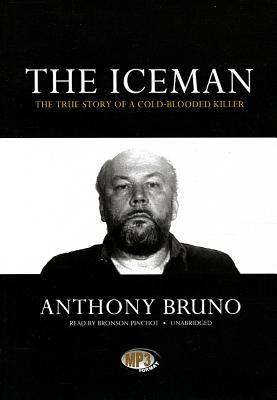 As you know if you read me here, I’m fascinated by American mafia culture. Right now, I’m working on a drawing of Paulie and Chrissy from The Sopranos. I thought Anthony Bruno’s The Iceman would be a perfect companion to listen to while I work, and it was! From Goodreads:

At home, Richard Kuklinski was a dedicated suburban family man; on the street, he was the Iceman, a professional hit man and lethal scam artist, a man so heartless he kept one of his victims frozen for over two years to disguise the time of death. His personal body count was over one hundred, but the police couldn’t touch him. Then undercover agent Dominick Polifrone posed as a mobster and began a deadly game of cat and mouse. The Iceman chronicles Kuklinski’s grisly career and exposes his murderous double life.

Kuklinski had a terrible, abusive childhood, the violence of which obviously followed him into adulthood. This book doesn’t cover it (and I’m no doctor), but he must have had some sort of untreated mental illness, too, from the descriptions of his wild mood swings; his wife said she never knew when he’d fly into a random fit of rage. I found it interesting that Kuklinski wasn’t like other mob guys you hear about—he was not a womanizer, he didn’t dabble in drugs or gambling. His killings were gruesome and horrifying, and the sheer impassivity he displayed regarding his actions and taking another human life is chilling.

The Iceman definitely scratched my perpetual true-crime itch for the time being. I thought about reading Philip Carlo’s book on Kuklinski, also titled The Ice Man but after his lackluster writing in The Butcher, I think I’ll just stay with Bruno’s book. This was a fast-paced, engaging read, even if at times towards the end some information was repeated. I think I have seen the 2012 film starring Michael Shannon (I’d have to see it again…) and now I definitely want to watch The Iceman Tapes documentary, where Kuklinski himself is interviewed on film.