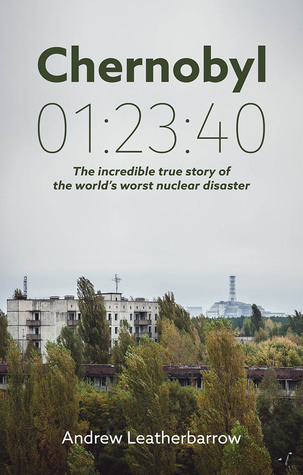 Andrew Leatherbarrow’s Chernobyl 01:23:40 was in my library recommendations after I read The Radium Girls earlier this year. I’m fascinated by disasters, natural and man-made, so I thought this sounded like a good read. Edited from Goodreads:

At 01:23:40 on April 26, 1986, Alexander Akimov pressed the emergency shutdown button at Chernobyl’s fourth nuclear reactor. It was an act that forced the permanent evacuation of a city, killed thousands and crippled the Soviet Union. The event spawned decades of conflicting, exaggerated, and inaccurate stories. This book presents an accessible but comprehensive account of what really happened. From the desperate fight to prevent a burning reactor core from irradiating eastern Europe, to the self-sacrifice of the heroic men who entered fields of radiation so strong that machines wouldn’t work, to the surprising truth about the legendary “Chernobyl divers,” all the way through to the USSR’s final show-trial. The historical narrative is interwoven with a story of the author’s own spontaneous journey to Ukraine’s still-abandoned city of Pripyat and the wider Chernobyl Zone.

Guys, how about we don’t have a nuclear holocaust, ok? Truly, I already knew (based on reading Hiroshima, The Radium Girls, etc.) that radium poisoning and nuclear bombs are bad. Devastating. Chernobyl 01:23:40 is another entry into the case for scrupulous handling radioactive material, taking all necessary precautions, and taking its inherent danger to living things and the world with the utmost seriousness. Now of course, this was a power plant and not weaponry, and this incident was mostly an accident-by-neglect (faulty construction of the plant, procedural failure, improper training, etc.). I agree that nuclear energy is a newer phenomenon and something we’re still learning about. I’m not convinced we should abandon nuclear power entirely. By today’s standards, would the Chernobyl plant even be operational with all the shortcuts taken on construction and procedure? Likely not, so the accident cannot necessarily be blamed on nuclear power itself but rather on human error. Still, its catastrophic consequences can’t be ignored. It’s incredible to me that even after all we’ve learned from the Curies, the Radium Girls, Hiroshima and Nagasaki, Bikini Atoll, and more, things like this seem to still be bound to happen. Look at Fukushima in 2011. Look at current threats between the person who won the electoral college and North Korea.

Leatherbarrow’s personal journey to the area was somewhat distracting from the horrific event and aftermath of the accident in April 1986, and I’m sorry to have missed photos in the paper book having listened on audio, but it was still a compelling, easily digestible, short read. I’m sure I can find his photos online, and I’ve seen some before anyway. The brief history of nuclear power in the first chapter was a great setup to the rest of the book. I think Chernobyl 01:23:40 is a good, accessible starting point if you want to learn more about this subject.