I bought Station Eleven right after it came out, and of COURSE I didn’t read it until two years later. Somehow it survived my Great Purge of Stuff of 2016 in the overseas move, and I finally read it last fall. Coincidentally, I won a copy of The Last One from a Goodreads giveaway right before moving too.These two post-apocalyptic literary books are often compared, and rightly so.

I had to work a bit to get into Emily St. John Mandel’s Station Eleven, and unfortunately (for me) I only got a little ways in before I had to put it down for the move, but when I finally picked it up again I flew through it. After a lethal virus sweeps the globe, a group of actors, musicians, and artists travel the decimated Great Lakes region performing plays and concerts to the few inhabitants left in the towns they pass through. There were a few odd things (like the dearth of guns/ammo and books in America after almost all of its citizens are wiped out… wouldn’t there be an abundance of these things?) but these minor anachronisms don’t detract from the story. I really enjoyed this thoughtful and imaginative speculative fiction novel. It shifts timelines, giving you a glimpse of living through a societal collapse instead of just showing you the aftermath. Thus, rather than being strictly about survival during and after a global epidemic, the story is more about beauty, nature, music, art, literature, and culture surviving. It’s about humanity and connection. Station Eleven was one of my favorite reads of 2016. [Read in September 2016.] 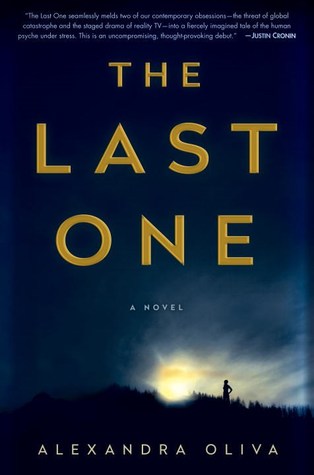 Alexandra Oliva shows she is a promising, creative writer with her debut novel, The Last One. During the filming of a survival reality TV show, a pandemic killed off much of the population. The show’s contestants have been cut off from the outside world and don’t know what’s happened. One person, a woman known as Zoo, who continues believing she’s in a game rather than an apocalypse. Zoo wasn’t as kick ass as I wanted her to be and I think the book is a bit long and winding overall. I also kind of wish I (as reader) hadn’t known that the corpses, danger, and devastation Zoo comes across were real—it left me frustrated that I knew and she didn’t, having to witness her behavior based on being in the dark. But I liked the book in general. It’s thought provoking regarding the portrayal of reality in media (how much of reality TV is real?) and how it can shape your perception of people, the world, etc. I think it’s worth a read if you like post-apocalyptic stories. [Read/listened to audiobook in March 2017.]