Like I said in my previous post, I have been craving some good fiction recently. Here are two fantastically weird books I read in the last couple months fit the bill and will rank highly when I look back at everything I read this year! I read great books by both of these authors before and was really excited for their new ones.

In Jeff VanderMeer’s Borne, Rachel is a scavenger in a post-apocalyptic city in the near future. She holes up in an abandoned apartment building with a mysterious guy named Wick, who worked for a biotech company in town that may or may not have something to do with ruining the city. One day scavenging, Rachel picks up Borne, an amorphous, living creature she raises and teaches like a child, but we’re not sure of Borne’s origins or real purpose. Meanwhile, there is a humongous building-sized grizzly bear named Mord that flies (no wings) above and terrorizes the city. What. Am. I. Reading. I loved it—it was suspenseful and immersive, strange and compelling. Just like in Annihilation and his Southern Reach Triology, VanderMeer is the king of weird world building and psychologically eerie style. I had absolutely no idea where the plot was going and it was awesome. [Read in Aug. 2017.] 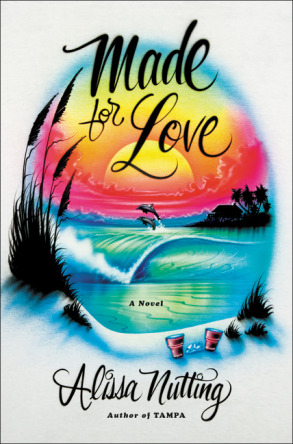 I was so excited for Made for Love by Alissa Nutting after reading her salacious book Tampa a few years ago. In Made for Love, Hazel leaves her tech mogul husband Byron after his inventions become too invasive. She stays with her aging father and his newly acquired life-like sex doll at his trailer-park retirement home, while trying to dodge Byron’s seemingly never-ending reach. Meanwhile, a second story line takes place involving a con man (think Sawyer from Lost) who is in love with dolphins. How will these people all intersect in the end? It sounds crazy and ridiculous but still makes total sense as you’re reading. I laughed out loud many times! I love Nutting’s absurdist but still kind of matter-of-fact style. This was a brilliant and imaginative story from Nutting and I was entertained and satisfied from start to finish. [Listened to audiobook in September 2017.]