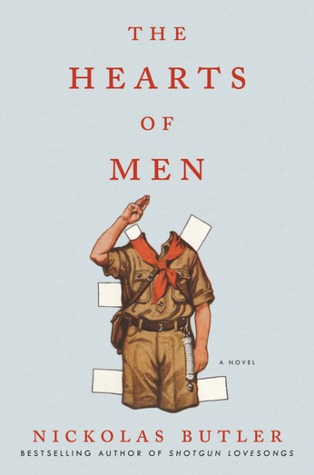 I’ve had my eye on Nickolas Butler ever since reading his debut, Shotgun Lovesongs, a couple of years ago, and put The Hearts of Men on my list as soon as it came out. And of course I’m going to read another book set in Wisconsin! From Goodreads:

Camp Chippewa, 1962. Nelson Doughty, age thirteen, social outcast and overachiever, is the Bugler, sounding the reveille proudly each morning. Yet this particular summer marks the beginning of an uncertain and tenuous friendship with a popular boy named Jonathan.

Over the years, Nelson, irrevocably scarred from the Vietnam War, becomes Scoutmaster of Camp Chippewa, while Jonathan marries, divorces, and turns his father’s business into a highly profitable company. And when something unthinkable happens at a camp get-together with Nelson as Scoutmaster and Jonathan’s teenage grandson and daughter-in-law as campers, the aftermath demonstrates the depths—and the limits—of Nelson’s selflessness and bravery.

The Hearts of Men is a sweeping, panoramic novel about the slippery definitions of good and evil, family and fidelity, the challenges and rewards of lifelong friendships, the bounds of morality—and redemption.

I have some of the same feelings I had about Shotgun Lovesongs. I really like how Butler dismantles the stereotypical notions of manhood and masculinity in his stories. And he is a fantastic storyteller. I never felt the pace lagging or any unnecessary meandering in The Hearts of Men. Each section is purposeful to the overall story and message. That said, the beginning is stronger than the end, mostly because the main characters, Nelson and Jonathan, seemed so fully realized and lively as children but became flat and somewhat generic in later sections as adults. Perhaps that was intentional, though? Is Butler trying to make a point that we lose something, some spark, as we age? I’m not sure—possibly, or it could possibly have been the narrator’s interpretation didn’t handle the jumps forward in time so well for me. I liked Rachel, Jonathan’s daughter-in-law, but I would have liked her to have been more realistic and more three-dimensional—Butler had a similar issue developing women characters in Shotgun. In this story, women are central to the hearts of these men, after all.

Ultimately, The Hearts of Men is a story about boys becoming men, fathers and sons, bravery and decency, how both romantic and platonic relationships affect you, and the ubiquity of being a flawed human. Butler has a sensitive voice and his storytelling is immersive, and I’ll definitely look forward to his next book.

Listened to audiobook in May 2017.