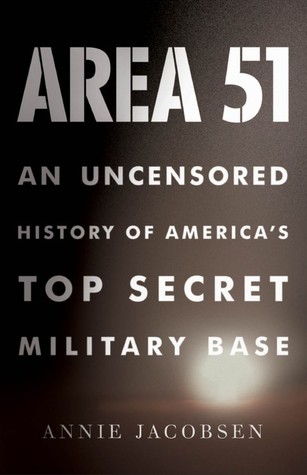 I borrowed the audio version of Area 51 by Annie Jacobsen from the library on a whim, for a road trip last year. I like learning about science, but I admit I can be intimidated beyond a cursory level sometimes. Of course I wanted to learn about secret aliens, though! Area 51 ended up being much more interesting and accessible than I anticipated. Edited from Goodreads:

It is the most famous military installation in the world. And it doesn’t exist. Located a mere seventy-five miles outside of Las Vegas in Nevada’s desert, the base has never been acknowledged by the U.S. government—but Area 51 has captivated imaginations for decades. […] Some claim it is home to aliens, underground tunnel systems, and nuclear facilities. Others believe that the lunar landing itself was filmed there. The prevalence of these rumors stems from the fact that no credible insider has ever divulged the truth about his time inside the base. Until now. In Area 51, Jacobsen shows us what has really gone on in the Nevada desert, from testing nuclear weapons to building super-secret, supersonic jets to pursuing the War on Terror. […] This is the first book based on interviews with eye witnesses to Area 51 history, which makes it the seminal work on the subject.

This was an excellent choice for a road trip. I wanted aliens, but what I got was so much more. In fact, aliens are the least interesting part of Area 51. The real meaty parts of the book that kept me most fascinated was the history of the military base and its black ops, rather than shaky conspiracy theories. Jacobsen does a fine job laying out previously unknown-to-the-public projects at the base about stolen and reverse-engineered technologies, nuclear weapons testing, the development of radar and stealth bombers, and more. There were many dangerous and catastrophic projects being carried out. I learned more about the Military Industrial Complex and corporations had their hands in the government, how compartmentalizing major secret projects is effective but complicates accountability, and how different factions of the military and intelligence community clashed over these projects. There are some insightful, respectful interviews with veterans who worked at Area 51 that add value to the book.

It’s too bad the final chapter, which finally ties in Roswell and aliens, was a letdown. Honestly I hardly even remember the details of this part compared to the rest of the book. Truth is definitely stranger (and more interesting) than fiction in the case of Area 51. This would be a great companion piece to Drift by Rachel Maddow.

Listened to audiobook in March 2016.