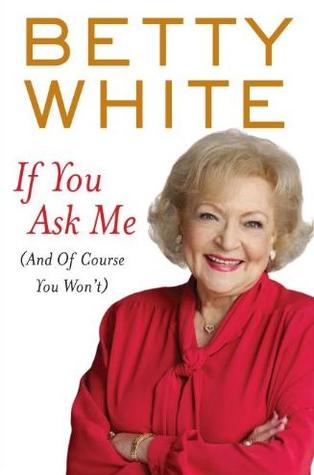 I needed something short and sweet for my recent rehearsal commutes, and If You Ask Me by Betty White fit the bill in spades. From Goodreads:

Drawing from a lifetime of lessons learned, seven-time Emmy winner Betty White’s wit and wisdom take center stage as she tackles topics like friendship, romantic love, aging, television, fans, love for animals, and the brave new world of celebrity. If You Ask Me mixes her thoughtful observations with humorous stories from a seven- decade career in Hollywood. Longtime fans and new fans alike will relish Betty’s candid take on everything from her rumored crush on Robert Redford (true) to her beauty regimen (“I have no idea what color my hair is and I never intend to find out”) to the Facebook campaign that helped persuade her to host Saturday Night Live despite her having declined the hosting job three times already.

Betty White might be one of the most likable celebrities ever. Her recent memoir If You Ask Me is a somewhat random collection of brief essays touching on topics from her career to her work with animals. Though it mostly focuses on the last 10–15 years of her career, she does talk about her youth a little bit and her family life as well. The audiobook was wonderful, hearing White read her own stories was so engaging and endears her even more to the listener. I’m not sure I would say I’d have preferred the paper book over audio—honestly I probably wouldn’t have thought to pick this up on paper—but I do feel like I missed some of the experience without any photos, which I understand are plentiful in the paper book.

If You Ask Me is a fun little tome worth the couple hours (or less!) it takes to get through.