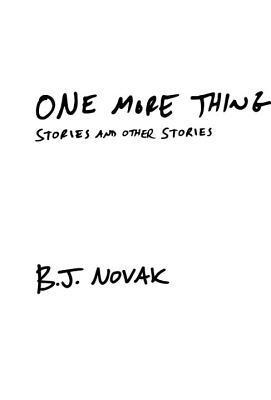 Another audiobook my husband and I listened to last month (new favorite thing!) was the short story collection One More Thing by B.J. Novak. We started it at home and finished it on our holiday travels. Edited from Goodreads:

B.J. Novak’s One More Thing: Stories and Other Stories is an endlessly entertaining, surprisingly sensitive, and startlingly original debut collection that signals the arrival of a welcome new voice in American fiction.

Across a dazzling range of subjects, themes, tones, and narrative voices, Novak’s assured prose and expansive imagination introduce readers to people, places, and premises that are hilarious, insightful, provocative, and moving-often at the same time.

I agree with the blurb: entertaining and surprising! There were a lot more stories than I expected (no table of contents on audio, of course), some were lengthy, and a few were just a single sentence. Many were wacky and wildly imaginative, and some were touching and sweet. One More Thing starts off strongly, with several standouts for me early in the book (and a few in the middle and end, too):

About halfway through, I felt a bit of a drop in the flow—maybe some of the extra-short stories didn’t really come across on audio very well. But I think that overall, One More Thing is a vastly better experience on audio than it might be on paper. Novak enlists an all-star cast to assist him in the narration—I recognized Mindy Kaling and Rainn Wilson. They all perform the roles and stories so well, it’s easy to get completely immersed and accept what’s happening, no matter how silly or ridiculous. The stories are irreverent and we laughed out loud frequently throughout. I can’t recommend the audio version highly enough!