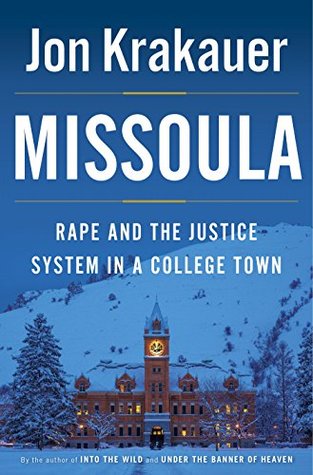 As a big fan of his work, I’ve been waiting for Missoula by Jon Krakauer to come up available through my local library’s Overdrive on audio since it was released this past April, and finally got to it last week. Edited from Goodreads:

Missoula, Montana, is a typical college town, with a highly regarded state university, bucolic surroundings, a lively social scene, and an excellent football team with a rabid fan base.

The Department of Justice investigated 350 sexual assaults reported to the Missoula police between January 2008 and May 2012. Few of these assaults were properly handled by either the university or local authorities. In this, Missoula is also typical.

A DOJ report released in December of 2014 estimates 110,000 women between the ages of eighteen and twenty-four are raped each year. Krakauer’s devastating narrative of what happened in Missoula makes clear why rape is so prevalent on American campuses, and why rape victims are so reluctant to report assault. Acquaintance rape is the most underreported crime in America. In addition to physical trauma, its victims often suffer devastating psychological damage that leads to feelings of shame, emotional paralysis, and stigmatization. PTSD rates for rape victims are estimated to be 50 percent, higher than for soldiers returning from war.

In Missoula, Krakauer chronicles the searing experiences of several women in Missoula—the nights when they were raped; their fear and self-doubt in the aftermath; the way they were treated by the police, prosecutors, defense attorneys; the public vilification and private anguish; their bravery in pushing forward and what it cost them.

As you can imagine, Missoula is a difficult book to get through. Krakauer is a relentless, dutiful researcher, and his work on Missoula is no exception. The subject matter is intense, very real, and a very real problem everywhere—Krakauer uses the single example of Missoula to illustrate the epidemic crisis that rape/sexual assault has become across the country.

I fully admit I was a bit shocked with the depth and detail of the descriptions of rape and assault—not for the faint of heart. But it’s completely necessary to the book and respectful to the victims for not sugarcoating what they went through. I was completely incensed at the perpetrators, the justice system for frequently failing these women, and even some citizen bystanders for heartless victim blaming. The cards are so stacked against women in this society that accusing a man of rape—especially a young man on a popular football team—more often than not is an exercise in futility. I can’t imagine being doubted, mocked, and shamed for a violent atrocity committed to YOU, and having to recount and relive this traumatic life-altering experience over and over again to police officers and lawyers.

One reason I gravitate to Krakauer’s books is that he maintains a clear-eyed perspective throughout. His tone is fair and without judgement, though you can usually tell which “side” he’s on. Missoula is an important, informative book for our times, and I suspect will go down as one of Krakauer’s more controversial works.