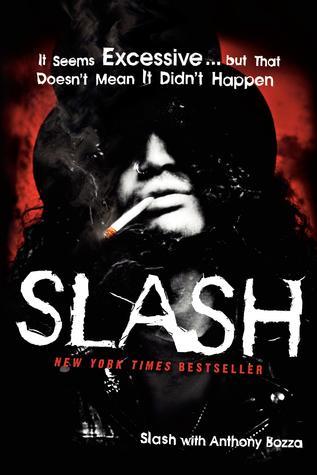 Of COURSE I had to read Slash by Slash last month! I tried to finish before going to his concert in Denver for our anniversary, but ended up finishing just in time for Halloween. Blurb from Goodreads:

For the first time ever, Slash tells the tale that has yet to be told from the inside: how the legendary band Guns N’ Roses came together, how they wrote the music that defined an era, how they survived insane, never-ending tours, how they survived themselves, and, ultimately, how it all fell apart. Slash is a window into the world of the notoriously private guitarist and a front seat on the roller-coaster ride that was one of history’s greatest rock n’ roll machines, always on the edge of self-destruction, even at the pinnacle of its success. Slash is everything Slash is: funny, honest, ingenious, inspiring, jaw-dropping… and, in a word, excessive.

This book is a little nuts. I was expecting more, I guess, based on the near-500 page length—more insight into his addictions and interpersonal relationships, more about his guitars and development as a player. His Guns N’ Roses anecdotes, when he goes on tangents about his guitars, and the touring are definitely the best, most engaging parts of the book. It was great to listen along to GNR’s Appetite for Destruction and the Use Your Illusion discs as I was reading about their process in writing those songs and recording the albums. Time and again Slash didn’t seem to be deeply affected by his demons, especially his drug abuse. “I OD’d and was dead for a few minutes which sucked, but then I kicked again, NDB.” That’s how some of those stories read to me. There are a few weird moments where Slash repeats or contradicts himself (saying he doesn’t “remember exactly” what was said, and then not five words later claiming “but I’ll never forget” what was said. Huh? Maybe co-writer Anthony Bozza dropped the ball on that, or the editors).

Slash is personable and down-to-earth, considering his fantastic journey and rock n’ roll lifestyle. Slash was a fun book that was compulsively readable. The chapters are lengthy, but the sections in each chapter are not, making it easy to pick up and read a bit here and there easily. Any fan of Slash, GNR, old-school rock, or rock music biographies and memoirs would enjoy Slash. Of course, Slash has accomplished a lot since its publication (2007), and continues to write, record, and tour. Despite my wanting a little more depth in general, in the end, I felt like I was hanging out with Slash and he was telling me his stories from life and the road, which is just what you expect from a rock memoir. It was an awesome warm-up to get me pumped for the concert last month!