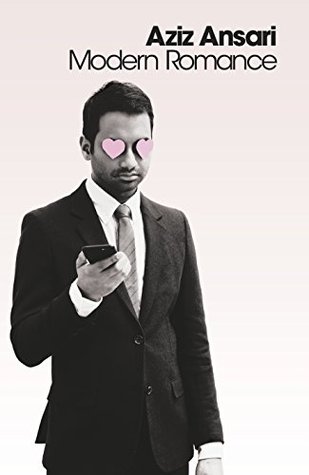 On our anniversary road trip to Denver a couple of weeks ago, my husband and I (ironically) listened to Modern Romance by Aziz Ansari on audio. Edited from Goodreads:

At some point, every one of us embarks on a journey to find love. We meet people, date, get into and out of relationships, all with the hope of finding someone with whom we share a deep connection. This seems standard now, but it’s wildly different from what people did even just decades ago. Single people today have more romantic options than at any point in human history. With technology, our abilities to connect with and sort through these options are staggering. So why are so many people frustrated? In Modern Romance, Ansari combines his irreverent humor with cutting-edge social science to give us an unforgettable tour of our new romantic world.

Modern Romance wasn’t quite what I expected… I guess I was thinking more along the lines of humorous personal anecdotes and silly “dos and don’ts” to dating. Turns out this book is more scientific, but not overly in-depth—Aziz does inject his brand of funny commentary throughout making it accessible. A lot of the book talks about how advancing technology has changed options and communication in dating, compared to how seemingly simple it was to find a mate just a few short decades ago.

I met my husband in grad school, neither of us had smartphones (we did text), and we did flirt a bit on Facebook, but our relationship was in-person right from the start. I never experienced dating in the modern technology age, really. I don’t think I’d even know where to begin with all the avenues Aziz and his writing partner Eric Klinenberg go over in Modern Romance. They focus on online dating sites and mobile apps, statistically successful profiles and awkward texting (and sexting), timing and mind games, and more.

Aziz does explain right at the start that Modern Romance covers mostly middle class heterosexuals, saying that delving into the romantic processes for homosexuals and other economic classes would be enough material for several other books in and of themselves. I liked the sections on the dating scenes of Japan, Brazil, and France, and also the interviews with people on their dating techniques and options in the 50s, 60s, and 70s. I was pretty shocked (mostly at myself) at how “old fashioned” I guess I am—I can’t imagine being dumped via text, while apparently that has become an acceptable norm for people just a few years younger than me.

The audio was great; Aziz’s narration is hilarious as expected, but you do miss out on images and graphs. It was fun to listen to this one with my husband, several really good discussion starters in here for us!