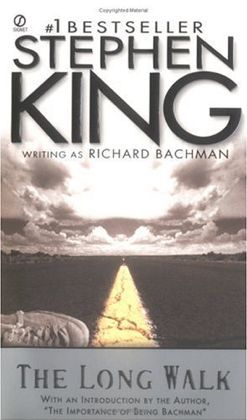 I can’t remember when I picked up The Long Walk by Stephen King (as Richard Bachman)… it was a gift for my husband a while ago. He recently read it and asked me to read it so we could talk about it. Book club! 🙂 From Goodreads:

Every year, on the first day of May, one hundred teenage boys meet for an event known throughout the country as “The Long Walk.” Among this year’s chosen crop is sixteen-year-old Ray Garraty. He knows the rules: that warnings are issued if you fall under speed, stumble, sit down. That after three warnings… you get your ticket. And what happens then serves as a chilling reminder that there can be only one winner in the Walk—the one that survives…

What I thought would be a typical teen dystopia in the vein of The Hunger Games (never read, seen the movies) turned out to be something else entirely. Participation in the Long Walk is voluntary, and for much of the book that bothered me. I thought that it should be mandatory, a lottery or something (like in Hunger Games) but THEN I thought, no. This must be voluntary. Boys selected for the Long Walk against their will would protest—they’d flee the country and go into hiding, anything to get out of it. Citizens would be in an uproar (think the Vietnam draft… and that was for a war! This is just for “The Prize” at the end, anything the winner wants for the rest of his life). Oohh… is this book an allegory for military service?? Anyway, brilliant.

King makes subtle statements on adolescent masculinity in our culture, which I’ve noticed in other books of his. But in The Long Walk, it might be the first King book I’ve read without any supernatural elements. This makes the idea of a military state in the (near?) future, where we’d cheer 100 boys literally walking to their deaths frighteningly plausible. In The Long Walk, much of the “action” is cerebral—the internal dialogue and philosophical musings of Ray, mostly. But King is so talented at character development, he manages to keep a the repetitive, singular activity of walking compelling for almost 400 pages. Also in this one, there are no subplots or intersecting storylines. It’s just the Walk, from start to finish. There’s intense, relentless focus on the boys’ horrifying physical and mental breakdowns after hours and miles of walking without rest.

The Long Walk came out in 1979, but it still has many points relevant to today’s American culture—some shockingly so. I was especially struck by how similar the feel of the Long Walk event is to reality competition shows, in that people voluntarily put themselves in the spotlight competing to win (whatever), usually at their own or others’ expense (dignity), risk, and suffering. And how society is addicted to this kind of sick voyeurism.

Awesome book, I loved it! If you’re looking for a psychological thriller with some elements of horror and dystopia that will keep you thinking about it long after, check out The Long Walk. It would be a great warm-up for Halloween!

1 thought on “the long walk”