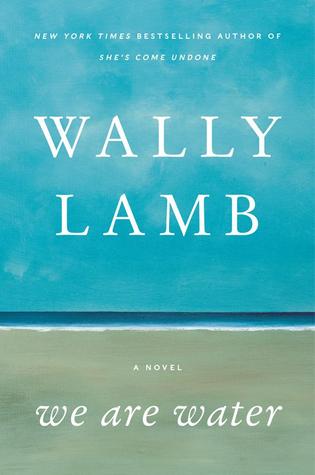 As a fan of Wally Lamb and his previous work, I was excited to get a copy of We Are Water for Christmas (2013, ahem). I added it to my TBR and there it sat until now! From Goodreads:

In middle age, Annie Oh—wife, mother, and outsider artist—has shaken her family to its core. After twenty-seven years of marriage and three children, Annie has fallen in love with Viveca, the wealthy, cultured, confident Manhattan art dealer who orchestrated her professional success. Annie and Viveca plan to wed in the Oh family’s hometown of Three Rivers, Connecticut, where gay marriage has recently been legalized. But the impending wedding provokes some very mixed reactions and opens a Pandora’s box of toxic secrets—dark and painful truths that have festered below the surface of the Ohs’ lives.

This has all the great drama I’ve come to expect from Lamb, with interweaving story lines and multiple characters with complex, intricately drawn-out histories. Everyone is damaged and has devastating secrets. They’ve weathered trauma after trauma that come to a boiling point in an expected way. Lamb has a way of making the characters very fleshed out, even those you think are secondary. The alternating perspectives each chapter worked for me—you get to live inside the minds of the characters as they go about normal days and reflect on their pasts. We Are Water is equal parts intrapersonal and interpersonal; it’s easy to become immersed in the thoughts and backstories of the members of the Oh family.

While I did get sucked in to the novel, the characters weren’t as intriguing as those in Lamb’s older books, like She’s Come Undone and I Know This Much is True; they were all pretty shallow. It read a little bit like a soap opera at times, but more sophisticated. Everyone frequently posed rhetorical questions in their very lengthy inner monologues, which became glaring to me after a while. I bet this could have been shaved down about 100 pages and still been just as good.

There are some heart-stopping scenes, though, especially the disastrous flood and an event at the end I don’t want to spoil. Although I felt the characters lacking a bit, Lamb does portray them all with compassion (as he’s known for), and he’s just awesome and sweeping family dramas where so much more lies below the surface. There are many elements here (child abuse, LBGTQ marriage, infidelity, and more) but it doesn’t feel bogged down, each issue is handled in a way that is relevant to the overall story.

We Are Water is my fifth of twelve books read for the 2015 TBR Pile Challenge.