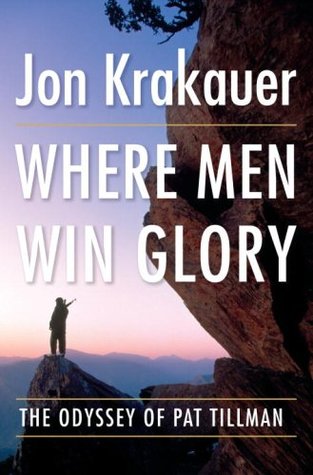 Jon Krakauer is one of my favorite authors, and I’ve read several of his books before I finally got to Where Men Win Glory, a biography of Pat Tillman, on audiobook this summer. From Goodreads:

Like the men whose epic stories Jon Krakauer has told in his previous bestsellers, Pat Tillman was an irrepressible individualist and iconoclast. In May 2002, Tillman walked away from his $3.6 million NFL contract to enlist in the United States Army. He was deeply troubled by 9/11, and he felt a strong moral obligation to join the fight against al-Qaeda and the Taliban. Two years later, he died on a desolate hillside in southeastern Afghanistan […] in a barrage of bullets fired by his fellow soldiers.

I was completely engaged by this book, part biography and part exposé. I vaguely remember the scandal as it was happening; I was early into my college years and not quite yet the political junkie I am today, but certainly the 9/11 attacks stirred my interest in learning more and becoming involved, if just a minuscule amount compared to how it impacted Tillman and drove him to action. Krakauer presents Tillman as a loyal all-American patriot who values hard work, respect, and honesty. Aside from being a little hot-headed, he really did seem like a stand-up kind of guy, dependable by family, friends, and teammates alike. His journal excerpts are particularly affecting, which include entries from his college years through his NFL career and even during the war. Tillman was forthright and specific about his disillusionment, anger, and discontent with the war, and what he wished for in the event of his death.

I was struck by the utter audacity of the government and military, then, to propagandize Tillman’s death, covering up and redacting key details of the tragedy. And of course, it’s important to remember this has happened to countless others who were not celebrities back home. Without saying it, Krakauer makes his position on the matter and opinion of the war and Bush administration clear. It’s a little hard to ignore that Krakauer is kind of doing just what Tillman did NOT want here—to be posthumously paraded around in the public eye (I’m paraphrasing). But Where Men Win Glory does especially succeed in reminding you of exactly how big the machine is (politics, military, media). Great read.