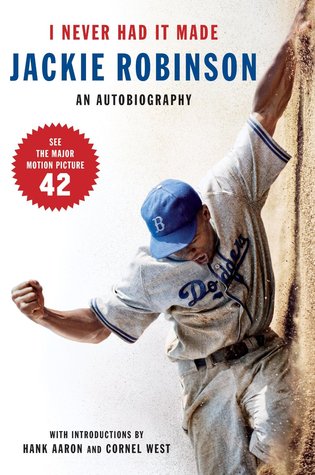 I had all these plans to write and publish blog posts over the holiday weekend (and after work this week) but couldn’t bear to be on the computer. Instead, I read, hung out with my husband and friends, and visited the Liberty Memorial at the National World War I Museum on Memorial Day. I also finished reading I Never Had It Made by Jackie Robinson on my e-reader. Edited from Goodreads:

Before Barry Bonds, before Reggie Jackson, before Hank Aaron, baseball’s stars had one undeniable trait in common: they were all white. In 1947, Jackie Robinson broke that barrier, striking a crucial blow for racial equality and changing the world of sports forever. I Never Had It Made is Robinson’s own candid, hard-hitting account of what it took to become the first black man in history to play in the major leagues. Originally published the year Robinson died, I Never Had It Made endures as an inspiring story of a man whose heroism extended well beyond the playing field.

I was reminded I had this in my e-reader when I was watching the Royals game on April 15—all the players (on all teams) wear #42 in honor of Jackie Robinson Day. (April 15 was opening day in 1947, Jackie’s first season in the majors.)

Jackie’s autobiography was surprising to me in a few ways, namely that it was less about baseball and more about other aspects of his professional life in business and politics. I also found it rather relevant to our current racial tensions and issues—I wonder what Jackie would have to say today.

The first freedom for all people is freedom of choice. I want to live in a neighborhood of my choice where I can afford to pay the rent. I want to send my children to school where I believe they will develop best. I want the freedom to rise as high in my career as my ability indicates. I want to be free to follow the dictates of my own mind and conscience without being subject to the pressures of any man, black or white. I think that is what most people of all races want. (96)

While I’m glad I read Never Had It Made and enjoyed getting a better idea of who Jackie was beyond his time on the field as a Brooklyn Dodger. He didn’t deeply analyze events or his feelings much, except for the very moving chapter about the death of his oldest son and throughout you can tell his love for his wife and family was palpable. But he recounting several hardships he faced growing up and “breaking the color barrier” in sports and business (being the first black corporate VP), and spats he had along the way with sports journalists and politicians alike.

I do wish he had covered his baseball career more extensively. I can’t be alone in that being the main interest for readers of this book, although his remembrance of his days in Montreal Royals was great—clearly he loved his time there! I admit to glazing over during the business sections a bit, and I also would have loved to learn even more about his role in the Civil Rights Movement. The prose is straightforward but rather blunt and dry, and can sometimes not feel so natural. But, Jackie was not a writer and from an era of strong-but-silent types, and I think the co-author here did a good job of conveying Jackie as a person and what concerned him during his lifetime.

On a personal note, this reminds me that I should stop by the Negro Leagues Baseball Museum here in Kansas City soon! It’s been quite a while since my last trip. Jackie played for the Kansas City Monarchs in 1945. (Just a fun fact from the biography project I did on Jackie Robinson in elementary school! 🙂 ) I’ll have to check out 42 soon, the movie that came out a couple years ago based on parts of I Never Had It Made.

I Never Had it Made is my third of twelve books read for my Ebook Challenge.

2 thoughts on “i never had it made”