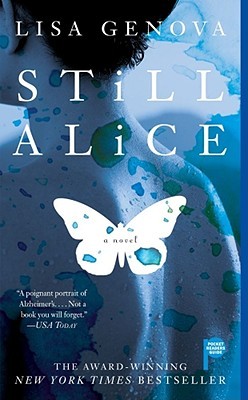 Still Alice by Lisa Genova has appeared in my recommended lists on Goodreads for years and has received rave reviews. Now with the movie out I figured I should give it a chance. From Goodreads:

Alice Howland is proud of the life she worked so hard to build. At fifty years old, she’s a cognitive psychology professor at Harvard and a world-renowned expert in linguistics with a successful husband and three grown children. When she becomes increasingly disoriented and forgetful, a tragic diagnosis changes her life—and her relationship with her family and the world—forever.

Still Alice didn’t live up to the high accolades for me. I never connected with Alice or any of the other characters. The writing was just a bit too clinical in parts, like, interruptions in the action to explain scientifically what was happening in Alice’s brain instead of the reader experiencing it through Alice. Know what I mean? And I don’t want to spoil it, but Still Alice doesn’t quite convey the sheer devastation an illness such as Alzheimer’s will wreak on a person’s lives and family. While the usual emotions and reactions one expects upon this diagnosis were expressed—like frustration, anger, confusion—the book merely stayed at the surface, just touching on certain actual, harsh realities of a disease such as this without going the full mile on them. It all ended a little too conveniently for me. [Hover-over spoiler]

I felt the secondary characters were all rather one-dimensional, for example we only really learn one aspect of their lives and personalities (acting, baby-making, or… I can’t even remember what the son did. Something in medicine). They weren’t very likable either, just came off as ungrateful and self-absorbed. Honestly, and this will sound so awful of me, I know: I didn’t find Alice to be particularly likable, either. Not terribly unlikable, though. I just didn’t connect with her, so the deterioration of her memory didn’t affect me like I expected or hoped. This could be me—books where the protagonists are well-off and act rather entitled are not really my cup of tea. [Hover-over spoiler]

All that said, there are some excellent, affecting scenes in Still Alice, especially once you get into the last third of the book, like when she starts doing things twice in succession without realizing it (introducing herself to someone, repeating her input on a presentation at work), when she gets lost in her own house, and when she is losing recognition of her daughter. I thought Alice’s list of basic questions to test out how she’s regressing throughout was one of the most potent features of the book.

I would love to see this movie and think it may be one of those books that actually translates better on film. (And I love Julianne Moore 🙂 )