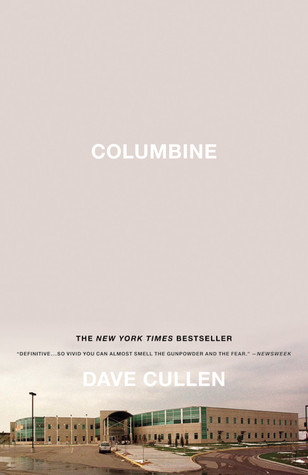 April 20 was the 16th anniversary of the Columbine High School massacre, and the headlines online were the impetus for me to finally read Columbine by Dave Cullen, one of the books on my TBR Pile Challenge this year. Edited from Goodreads:

On April 20, 1999, two boys left an indelible stamp on the American psyche. Their goal was simple: to blow up their school, Oklahoma-City style, and to leave “a lasting impression on the world.” Their bombs failed, but the ensuing shooting defined a new era of school violence—irrevocably branding every subsequent shooting “another Columbine.”

In this revelatory book, Dave Cullen has delivered a profile of teenage killers that goes to the heart of psychopathology. He lays bare the callous brutality of mastermind Eric Harris, and the quavering, suicidal Dylan Klebold, who went to prom three days earlier and obsessed about love in his journal.

A close-up portrait of hatred, a community rendered helpless, and the police blunders and cover-ups, it is a compelling and utterly human portrait of two killers—an unforgettable cautionary tale for our times.

I was a sophomore in high school when this tragedy happened and I remember it being all over the news, my parents worrying, and my school taking on new policies and procedure measures after this. The next school year, we started having random lockdown and bomb threat drills. It felt kind of strange and slightly surreal, because after a relatively worry-free, safe childhood, all of a sudden there was this shift to a climate of fear and danger everywhere. Of course, this was intensified my freshman year of college when 9/11 happened. It was just a jarring lesson of the “real world,” the first defining moment of “where were you when…?” of my generation, I suppose you could say.

Columbine by Dave Cullen was released 10 years after the event, and examines it from many angles, including the shooters, the families, the police and investigators, and the press. I was completely hooked from the first page and could hardly put it down. I ended up reading 200+ pages alone during the Dewey’s 24-Hour Readathon a couple weekends ago. Reading this one was unsettling emotionally in a way—I knew how this turns out, but deep inside I was oddly hoping the killers would be stopped before reaching the school, they would change their minds, something. Weird, right? Especially with the shocking amount of hints both of them dropped before April 20.

Cullen structures Columbine to read more as a narrative non-fiction, with clearly defined “rules” for how he expresses thoughts and conversations related in the book, with relentless, highly detailed research throughout. It is a heartbreaking and horrifying book, but fascinating. The author seamlessly weaves the backstories of the killers, the school, the authorities, and more leading up to the massacre with what happened afterwards to this community and those personally involved.

As you probably remember, national media directed blame at various factors, which all turned out to be bogus. Remember the Trenchcoat Mafia? Pointing the finger at Marilyn Manson’s music and video games like Doom? Rumors that Harris and Klebold were outcasts targeting jocks who bullied them? Turns out none of these were “reasons” for the carnage.

The killers. I really had no idea about either of them, who Harris and Klebold were as people. That Harris was a psychopath and Klebold was a suicidal depressive are conclusions that Cullen, a journalist, has come to based on exhaustive research. His case is very compelling based on the evidence, though, from their behaviors and actions prior to “Judgement Day” to their journals and videos left behind. There seems to be no question that Harris was manipulative and intelligent, and it appears Klebold was a perfect, vulnerable match for Harris. That, of course, does not excuse Klebold—he was ultimately a willing participant.

I have mixed feelings about Columbine. On one hand, I think it’s an important read as this was a seismic event in contemporary American history, but on the other, does it glorify Harris’s ultimate goal—posthumously giving him the destructive power and attention he was seeking? He wasn’t an outcast. He didn’t “snap,” he meticulously plotted this horrific event. Does it change anything? Does it explain a killer’s motives or make the tragedy any easier to accept? I really admire the families and survivors for their compassion and forgiveness. What have we learned from this?

Since Columbine we’ve seen a sickening surge in gun violence and shooting sprees in public places across the country, events that claimed more lives and caused more damage than Harris’s master plan. So why was it such a pivotal moment in our country’s history? I’m not exactly equipped to provide definitive answers here (and possibly, probably none really exist) or moderate a debate, but my thoughts are that the media speculation and non-stop coverage (and our consumption of it) plays a large part. I took that as the biggest message from Cullen’s Columbine—how we as a society reacted, both good and bad—and I’m grateful to have read this one because it opened my eyes to exactly how complex the whole situation actually was, including and well beyond the two young men who committed such an unspeakable act.

Columbine is my fourth of twelve books read for the 2015 TBR Pile Challenge.