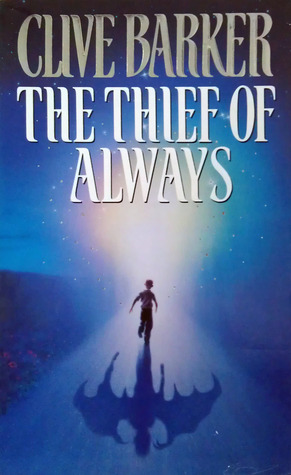 I always seem to find my way to at least one YA book a year, and Clive Barker’s The Thief of Always was a great pick—right up my alley. From Goodreads:

Mr. Hood’s Holiday House has stood for a thousand years, welcoming countless children into its embrace. It is a place of miracles, a blissful rounds of treats and seasons, where every childhood whim may be satisfied… There is a price to be paid, of course, but young Harvey Swick, bored with his life and beguiled by Mr. Hood’s wonders, does not stop to consider the consequences. It is only when the House shows it’s darker face—when Harvey discovers the pitiful creatures that dwell in its shadows—that he comes to doubt Mr. Hood’s philanthropy. The House and its mysterious architect are not about to release their captive without a battle, however. Mr. Hood has ambitious for his new guest, for Harvey’s soul burns brighter than any soul he has encountered in a thousand years…

The Thief of Always was one of my husband’s all-time favorites as a child, one he had read many times. The night he started his recent re-read a month or so ago, he quoted the first line to me before he even opened the book:

Great opening. I wish I had read this as a kid! This was the first Clive Barker book I’ve read, and it is reminiscent of Neil Gaiman or Lemony Snicket in its inherent creepiness and sense of dread… while somehow managing to be kind of cute in a way. It’s a very imaginative story with twists and turns, and I’ve thought of it quite a few times since I finished. I loved the dank danger of the lake, and the rapid changing of the seasons. If I have a quibble, I would have liked to learned more about some of the characters, Lulu especially—the quiet girl Harvey encounters who was at the Holiday House when he arrived. And the backstories of Rictus, Marr, Jive, Carna, and the rest.

Another thing that was really great about the copy I read was Barker’s own black-and-white illustrations. They were defined, nuanced, and greatly enhanced the macabre scenes and menacing characters.

I was disappointed to learn that attempts at making a The Thief of Always movie have fallen through! It would translate fantastically to film, especially since this was a book readers of all different ages can enjoy.