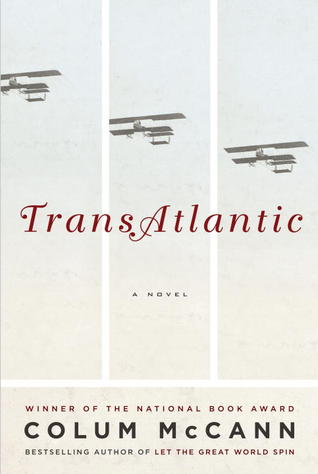 In March, I thought it would be fitting to get in (stay in?) the Irish spirit with TransAtlantic by Colum McCann, an Ireland native whose book focuses on several people and their dealings with the country. From Goodreads:

Newfoundland, 1919. Two aviators—Jack Alcock and Arthur Brown—set course for Ireland as they attempt the first nonstop flight across the Atlantic Ocean, placing their trust in a modified bomber to heal the wounds of the Great War. Dublin, 1845 and ’46: On an international lecture tour in support of his subversive autobiography, Frederick Douglass finds the Irish people sympathetic to the abolitionist cause—despite the fact that, as famine ravages the countryside, the poor suffer from hardships that are astonishing even to an American slave. New York, 1998: Leaving behind a young wife and newborn child, Senator George Mitchell departs for Belfast, where it has fallen to him, the son of an Irish-American father and a Lebanese mother, to shepherd Northern Ireland’s notoriously bitter and volatile peace talks to an uncertain conclusion.

These three iconic crossings are connected by a series of remarkable women whose personal stories are caught up in the swells of history. Beginning with Irish housemaid Lily Duggan, who crosses paths with Frederick Douglass, the novel follows her daughter and granddaughter, Emily and Lottie, and culminates in the present-day story of Hannah Carson, in whom all the hopes and failures of previous generations live on. From the loughs of Ireland to the flatlands of Missouri and the windswept coast of Newfoundland, their journeys mirror the progress and shape of history. They each learn that even the most unassuming moments of grace have a way of rippling through time, space, and memory.

I found TransAtlantic to be a quiet read, with my interest ebbing and flowing a bit, I think because it’s laid out like a short story collection with one family as the underlying unifier. I was absolutely enthralled by the opening two parts, focusing on Alcock and Brown and their historic 1919 flight across the Atlantic ocean (the first ever), and Frederick Douglass’s visit to Ireland in the 1840s. The middle waned for me, especially the Sen. George Mitchell section, but picked up steam again for the last third. I thought McCann’s writing was soft and lovely, and I was on the edge of my seat for that opening chapter flying across the Atlantic—the urgency of the action was intense.

Though I enjoyed the book as a whole immensely, I do wish that the characters could have been more fully realized. I would have read a stand-alone book on Alcock and Brock or Douglass’s Ireland trip. Especially Douglass—McCann takes this piece of history and paints a vivid picture, but I wonder what Douglass, a former slave, thought of the dire conditions and abject poverty he surely encountered in 1845 Ireland? Although probably wisely, McCann doesn’t venture to imagine what Douglass may have been thinking on that subject (perhaps he didn’t document those thoughts in a diary or letters). I appreciate the level of research McCann must have put into TransAtlantic for the three main “crossings,” but the family stuff kind of fell a little flat for me in places. Although I did like Lily’s story best. I think the time-jumping was just a bit confusing, I had to keep reminding myself who was whom’s mother.

I’m so glad I finally got around to reading TransAtlantic. It reminded me of Almost Famous Women (my review) and Burial Rites (my review), in writing style and being fact-based historical fiction. Lovely book.

TransAtlantic is my third of twelve books read for the 2015 TBR Pile Challenge.