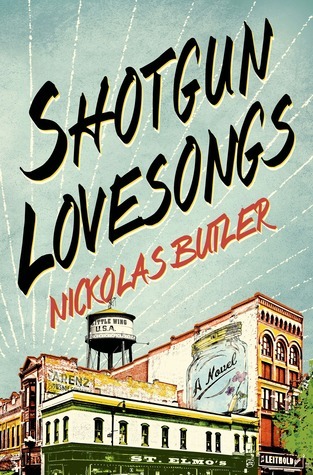 Shotgun Lovesongs by Nickolas Butler made the rounds on book blogs last year, and it came up as available on audio through my library last month. I didn’t realize it until I was almost finished, but this book is a great fit for the KC Library’s Love on the Rocks program. From Goodreads:

Hank, Leland, Kip and Ronny were all born and raised in the same Wisconsin town—Little Wing—and are now coming into their own (or not) as husbands and fathers. One of them never left, still farming the family’s land that’s been tilled for generations. Others did leave, went farther afield to make good, with varying degrees of success; as a rock star, commodities trader, rodeo stud. And seamlessly woven into their patchwork is Beth, whose presence among them—both then and now—fuels the kind of passion one comes to expect of love songs and rivalries.

There was a lot I liked about Shotgun Lovesongs. First, yay Wisconsin! It’s not everyday that you experience literary fiction set in Wisconsin (my home state), especially with it being another subtle, accurately portrayed character in itself. I’ve since learned that Butler is a Wisconsin resident, so that obviously makes the setting click, with its spot-on references. I was easily taken by the five friends and immersed in their world, as I have first-hand experience of small, rural Wisconsin towns myself. Their interpersonal relationships and struggles were realistic and easily relatable. Though Little Wing is fictional, I love the nod to Stevie Ray Vaughan (who died in a helicopter crash in Wisconsin) and Jimi Hendrix. Beyond that, with basing his main protagonist on Bon Iver’s leader Justin Vernon (a Wisconsin native), obviously music is a big inspiration for Shotgun and I loved that aspect of this book.

While I said the Wisconsin references were spot-on (and they were), occasionally they were a skosh heavy handed (John Deere and Leinenkugels [almost no one says the full name] and Carhartts oh my!), and the women didn’t feel fully fleshed out for me. Butler shatters some stereotypes with the men, but sadly plays right into others with the women of his fictional rural town (babies on the brain, frumpy clothes for farmer’s wives? come on). I thought it was great that on the audio each character was read by a different actor in the alternating-viewpoint chapters. The actors didn’t sound like they were from “up-nort” (forgivable) but thinking back, the characters all “spoke” in sort of the same voice… their inner monologues were rather similar.

I enjoyed Shotgun Lovesongs very much, though—it was just the right kind of escapism I’ve been needing lately. I’ve also found out that the movie rights have been secured; I can see this translating to film quite well!

Shotgun Lovesongs is my fourth book of five for the KC Library’s Love on the Rocks Adult Winter Reading Program.