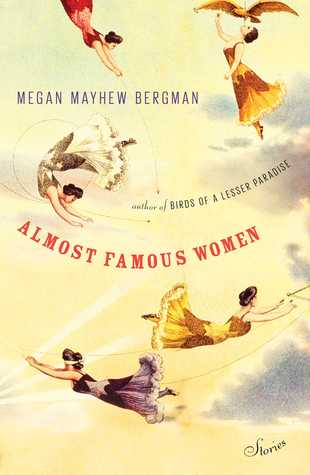 I couldn’t believe it when Megan Mayhew Bergman’s Almost Famous Women came through at the library for me, it’s so new! I lucked out this time; it’s a great little collection. From Goodreads:

The fascinating lives of the characters in Almost Famous Women have mostly been forgotten, but their stories are burning to be told. Now Megan Mayhew Bergman, author of Birds of a Lesser Paradise, resurrects these women, lets them live in the reader’s imagination, so we can explore their difficult choices. Nearly every story in this dazzling collection is based on a woman who attained some celebrity—she raced speed boats or was a conjoined twin in show business; a reclusive painter of renown; a member of the first all-female, integrated swing band. We see Lord Byron’s illegitimate daughter, Allegra; Oscar Wilde’s troubled niece, Dolly; West With the Night author Beryl Markham; Edna St. Vincent Millay’s sister, Norma. These extraordinary stories travel the world, explore the past (and delve into the future), and portray fiercely independent women defined by their acts of bravery, creative impulses, and sometimes reckless decisions.

Unfortunately I don’t have the titles (had to return to the library), but a few chapters especially stood out to me: those about the conjoined Hilton twins, Joe Carstairs, Dolly Wilde, and Romaine Brooks. These four felt the meatiest and most engaging—Bergman could expand each of these to its own full-length book and I’d read them. Her prose is at once delicate and lovely but also straightforward. I found it wonderfully different to experience slices of the women’s lives through the eyes of others in proximity to them, rather than being inside their heads (with a few exceptions).

The shortest chapters were about 2–5 pages, and only one left an impression on me—the one about the women liberated from the Bergen-Belsen concentration camp. Two stories I really enjoyed but perhaps didn’t quite fit with the collection were about Allegra Byron, illegitimate daughter of Lord Byron, and the updated take on The Lottery by Shirley Jackson. They just didn’t exactly fit, I felt, because Allegra was a child and the Lottery update was pure fiction instead of historical fiction. But they were excellently written and honestly two of my favorites in the collection.

I have struggled with short stories in the past, and still had to try a bit with this (due to external circumstances, I’ve been distracted while reading lately), but Almost Famous Women was one of the more compelling and page-turning collections I’ve read. I think one reason I became so intrigued is because these real-life women were intriguing—I found myself doing a little internet sleuthing on Bergman’s subjects and was fascinated. I don’t think I would have ever randomly discovered these women and their stories on my own without Bergman’s book.