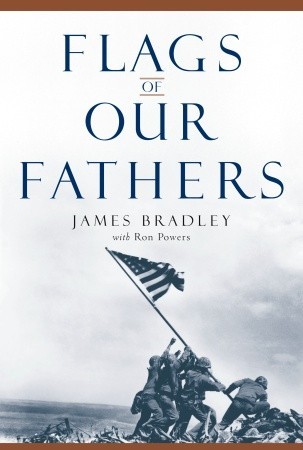 Staying on track for my TBR Pile Challenge, last month I read Flags of Our Fathers by James D. Bradley with Ron Powers. From Goodreads:

In this unforgettable chronicle of perhaps the most famous moment in American military history, James Bradley has captured the glory, the triumph, the heartbreak, and the legacy of the six men who raised the flag at Iwo Jima. Here is the true story behind the immortal photograph that has come to symbolize the courage and indomitable will of America.

In February 1945, American Marines plunged into the surf at Iwo Jima—and into history. Through a hail of machine-gun and mortar fire that left the beaches strewn with comrades, they battled to the island’s highest peak. And after climbing through a landscape of hell itself, they raised a flag.

Now the son of one of the flagraisers has written a powerful account of six very different young men who came together in a moment that will live forever.

I have had my eye on Flags of Our Fathers ever since I first spotted it sitting on my grandmother’s shelf several years ago. I have a minuscule connection to this book—the author and his father, one of the men in the iconic photograph, are from Antigo, the same small up-north Wisconsin town as my father. My grandmother was undoubtedly acquainted with the Bradley family, and our family has used its funeral home services over the years. When my dad and I were in Honolulu last summer, we visited the Pearl Harbor memorial site and he bought me a copy of the book from the gift shop. I’m not sure exactly what compelled me to read Flags right when I did, but my reading of it just so happened to coincide with the 70th anniversary of the battle at Iwo Jima and the flagraising. I love when that sort of serendipity happens!

Flags relates the harrowing battle very well—the whole middle third of the book covering this is hard to put down. I learned some abhorrent facts, but I appreciate that Bradley was generally fair in relating the details of the war, not blaming one side or the other. He is biased on the subject of his father, of course, but that’s not distracting or overwhelming. There were a few repetitive statements throughout, and occasionally Bradley inserted himself and his thoughts or feelings into the story that pulled me out of it a little. He did an excellent job of conveying the horrors of war, and this lengthy, confusing, and exhausting battle in particular.

Further, Bradley went on to relate what happened to the three surviving flagraisers after the war, which I feel is just as important to examine in any discussion of any war. I didn’t really know much about bond tours before reading this book, and how its a relic of the past now, something that would never happen today. With the lives of the flagraisers covered from youth to death, Flags provides a cross-section of what war can do to a person’s psyche, too, from post-traumatic stress disorder to an inflated, false sense of celebrity to the desire to retreat from unwanted attention and live a normal life. What happens when everyone insists you’re a hero when you just happened to be in a certain place at a certain time, just doing your duty like everyone else? It really speaks to the profound respect and loyalty these men had to each other, that just because they put up a flag they knew they weren’t any different from or more special than all the other men on that island, especially those that died there.

Flags of Our Fathers is my second of twelve books read for the 2015 TBR Pile Challenge.