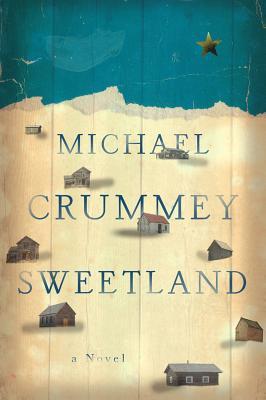 The first of several books I put on hold at the library to come through (at the same time…) was Sweetland by Michael Crummey. I was pretty surprised I got it so fast since it was just released a few weeks ago! From Goodreads:

The scarcely populated town of Sweetland rests on the shore of a remote Canadian island. Its slow decline finally reaches a head when the mainland government offers each islander a generous resettlement package the sole stipulation being that everyone must leave. Fierce and enigmatic Moses Sweetland, whose ancestors founded the village, is the only one to refuse. As he watches his neighbors abandon the island, he recalls the town’s rugged history and its eccentric cast of characters. Evoking The Shipping News, Michael Crummey, one of Canada’s finest novelists, conjures up the mythical, sublime world of Sweetland’s past amid a storm-battered landscape haunted by local lore.

There was so much I loved about this book. The characters are all, well, real characters! I was rooting for Moses Sweetland the whole time, and his hesitance about all the change on the island of Sweetland, where his family has lived for generations. It was easy to empathize with Sweetland and his stubborn refusal of the government deal. Change is hard! Especially when you don’t want it. Also, there is something profoundly sad about traditions and a certain way of life dying out. It’s a heartrending story.

I thought the writing was fantastic, too—a certain gentleness to it, poetic almost, while being totally believable. I’m not Canadian, but I imagine the language must be idiosyncratic; it felt genuine and relevant. I thought the story was down to earth and wistful without being overly sentimental. The characters are complex, eccentric, and wholly individual. The first half immerses you in life on the island, and the second half builds to a stunning climax with existential realizations.

The atmosphere of this one also was acutely perfect for the cold, gray weather we’ve been having here lately. I don’t usually have the chance to read brand-new books but I’m really glad this one came through so quickly.