In addition to the three short books I read on paper and electronically, I listened to a couple of audiobooks on the road last week and on my rehearsal commutes this week, rounding out my reading for 2014: 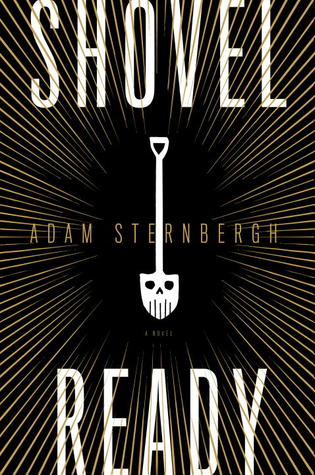 I picked Shovel Ready by Adam Sternbergh for our drive to Wisconsin partly because it was fairly short, and also because it seemed like a plot that both Nick and I would enjoy. While not the greatest example of post-apocalyptic literature I’ve encountered, Shovel Ready was still a fun, action-packed read that was perfect for our time in the car. The book follows Spademan, a garbageman-turned-hitman in a New York City that was decimated by a surprise dirty bomb in Times Square. The wealthy can hook themselves up to a virtual world (a la Ready Player One) while everyone else ekes by out on the chaotic, dangerous streets. Spademan is hired to kill the daughter of a famous evangelist, and thus begins the tumultuous, mysterious adventure in Shovel Ready. [Listened to audiobook from December 19 to 26, 2014.]

I just finished The Ocean at the End of the Lane by Neil Gaiman today, another audiobook I chose for its brevity and the story sounded pretty interesting. This is the first Gaiman work I’ve read. Generally I enjoyed Ocean, though I’m not sure I was compelled enough to seek out more Gaiman. It leaned just a bit too YA and fantasy for my tastes. In Ocean, an unnamed middle-aged man returns to his hometown for a funeral, and ends up stopping by the street on which he grew up and visiting the home of a wise-beyond-her-years, apparently magical girl named Lettie Hempstock, with whom he was friends. At her house, he speaks with one of Lettie’s family members and long-forgotten events start coming to light again. Ocean straddles several genres, with elements of fantasy, horror, adventure, and mystery, ultimately boiling down to a battle between good and evil and the dissociation existing between childhood and adulthood. I have to say it was a treat to listen to Gaiman himself narrate this audio version! I think his reading made it a better experience than paper would have been for me in this case. [Listened to audiobook from December 27 to 31, 2014.]