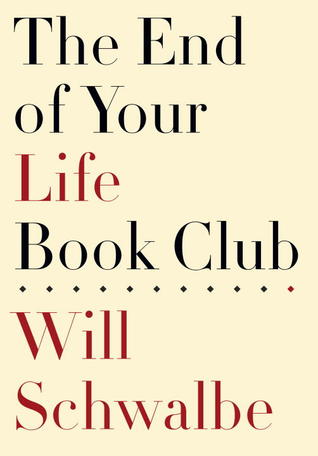 I picked up a copy of The End of Your Life Book Club by Will Schwalbe several months ago when it was making the book blog rounds, but put off reading it in the wake of both my grandmothers’ recent deaths. I just thought it might cut too deep at the moment, but finally I decided to give it a read, despite my tender heart right now. From Goodreads:

This is the inspiring true story of a son and his mother, who start a “book club” that brings them together as her life comes to a close. Over the next two years, Will [Schwalbe] and [his mother] Mary Anne carry on conversations that are both wide-ranging and deeply personal, prompted by an eclectic array of books and a shared passion for reading. Their list jumps from classic to popular, from poetry to mysteries, from fantastic to spiritual. The issues they discuss include questions of faith and courage as well as everyday topics such as expressing gratitude and learning to listen. Throughout, they are constantly reminded of the power of books to comfort us, astonish us, teach us, and tell us what we need to do with our lives and in the world. Reading isn’t the opposite of doing; it’s the opposite of dying.

I enjoyed The End of Your Life Book Club overall. It beautifully demonstrated how books can bond people together and open up a dialogue about the world, culture, events, and more that we experience in this life, and how books act as a bridge between the past, present, and future. I admired Mary Anne’s humanitarianism and accomplishments, even though she seemed like a pretty intense person in general (and some of her achievements and personality seemed too good to be true). I interpreted this memoir as a loving tribute, detecting nothing but love and respect from Will for his mother, if sort of extra carefully, from arm’s length.

There are a few parts of the book that made me raise an eyebrow. I didn’t personally need to know about Mary Anne’s struggle to decide what to do with her money, who was getting her frequent flier miles, etc. The privilege and elitism of this family was too much sometimes; it reminded me of the beginning of Joan Didion’s The Year of Magical Thinking (I DNF’d because of the elitism), which is also a book discussed in EoYLBC. However I think that Schwalbe described his family’s privilege much more delicately than Didion, palpable but easier to swallow. I also perceived Mary Anne as a person needing to be in control and have things go as planned, which was a bit off-putting for me.

Apparently, EoYLBC is a fairly polarizing memoir. It’s pretty specific and narrow in its focus—more about the relationship of Will and Mary Anne, the book club, Mary Anne’s life and less about books, which disappointed many readers. On one hand I agree with that sentiment, but on the other I wouldn’t want spoilers.

The ending resonated with me most of all, though, even prompting a few tears—the part when the family stands vigil by Mary Anne’s bedside in her last hours. I just went through this with one of my grandmothers last year, and it was an experience I will never forget.

1 thought on “the end of your life book club”