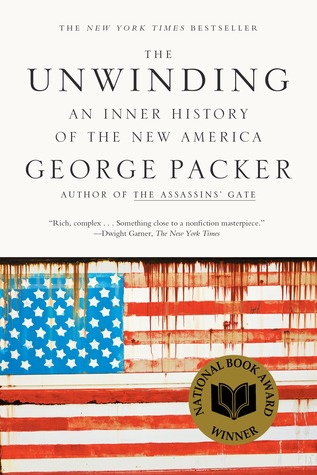 In the aftermath of the disappointing (to me) November midterm elections, I thought there was no better time to finally read The Unwinding: An Inner History of the New America by George Packer, which I picked up earlier this year. From Goodreads:

American democracy is beset by a sense of crisis. Seismic shifts during a single generation have created a country of winners and losers, allowing unprecedented freedom while rending the social contract, driving the political system to the verge of breakdown, and setting citizens adrift to find new paths forward. In The Unwinding, George Packer, author of The Assassins’ Gate: America in Iraq, tells the story of the United States over the past three decades in an utterly original way, with his characteristically sharp eye for detail and gift for weaving together complex narratives.

Reading The Unwinding produced a lot of complex emotions in me. It’s been a long time since a book made me feel sad, helpless, and angry all at the same time. Packer presents the lives of several individuals—a factory worker-turned-community organizer, a biodiesel fuel entrepreneur, an equal-parts hopeful and cynical political operative, a poverty-stricken family—which expose the downward spiral the United States has been on for the last four decades. Mixed in are portraits of wildly successful people (Oprah, Jay-Z, Sam Walton), which stand in stark contrast to the lives of the “normal” folks. He also brings up the housing bubble, Great Recession, rapid decline of the once-thriving Rust Belt industries, Occupy Wall Street, and how Wall Street and Washington have become greed- and power-hungry bedfellows. An important person only briefly mentioned is Elizabeth Warren, and I HIGHLY recommend reading her memoir A Fighting Chance (my review) after this one if you have the opportunity.

I appreciate that Packer doesn’t overtly express his own opinions, though it’s fairly clear from his careful wording. He doesn’t share solutions or analysis of how the playing field of our nation has become so grossly disparate—the stories here are enough of an indictment themselves, with prosperity being wildly skewed in favor of the top 0.01 percent. This could easily be expanded with a sequel exposing other massive issues the United States is facing, like climate change, income inequality, race relations and the rise of apparent militarized police state, and religious beliefs pervading government policies, for example.

Though as I mentioned, the lives laid out here in The Unwinding often made me upset and incensed, I haven’t lost hope for my country. I have a little trouble articulating my feelings exactly, since we’re still in this mess… I wonder what it might be like to read this one in 20 years from now?