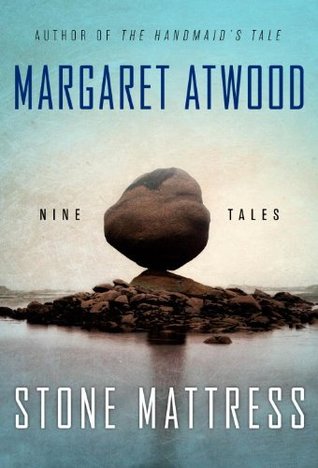 NEW ATWOOD! A few weeks ago I received Stone Mattress by Margaret Atwood in the mail, and promptly put it at the top of my to-read-next list. From Goodreads:

Margaret Atwood turns to short fiction for the first time since her 2006 collection, Moral Disorder, with nine tales of acute psychological insight and turbulent relationships bringing to mind her award-winning 1996 novel, Alias Grace. A recently widowed fantasy writer is guided through a stormy winter evening by the voice of her late husband in “Alphinland,” the first of three loosely linked stories about the romantic geometries of a group of writers and artists. In “The Freeze-Dried Groom,” a man who bids on an auctioned storage space has a surprise. In “Lusus Naturae,” a woman born with a genetic abnormality is mistaken for a vampire. In “Torching the Dusties,” an elderly lady with Charles Bonnet syndrome comes to terms with the little people she keeps seeing, while a newly formed populist group gathers to burn down her retirement residence. And in “Stone Mattress,” a long-ago crime is avenged in the Arctic via a 1.9 billion-year-old stromatolite. In these nine tales, Margaret Atwood is at the top of her darkly humorous and seriously playful game.

Much improved Atwood experience from my last read of hers earlier this year (The Blind Assassin—not my fave). I’m not generally attracted to short stories or fantasy elements, but Atwood managed to pull me in for the majority of these surprisingly gothic nine tales. I love it when you’re so into a book that all day you just think about when you’ll be able to read it some more.

A couple of the stories were perhaps on the long side, and some I wished went on longer, but overall they were all original and interesting, with Atwood’s signature dark humor and eccentricity. I rarely read literature in which middle-aged and elderly people are protagonists to begin with, let alone so well fleshed out. For me, the strongest of the stories were the ones more rooted in reality rather than fantasy… however my favorite was probably “Lucus Naturae,” in which a woman disfigured by a strange disease is mistook for a vampire/werewolf creature by her family. Others that stood out to me were “The Dead Hand Loves You,” “Stone Mattress,” and “The Freeze-Dried Groom,” although they are all so good!

My only (tiny) disappointment was that I encountered three typos in my copy! (Aphinland twice in “Alphinland”—missing the L—and Irene instead of Irena once in “The Dead Hand Loves You.”) Boo typos. Don’t let that stop you from reading this wonderful, entertaining collection, of course! 😉