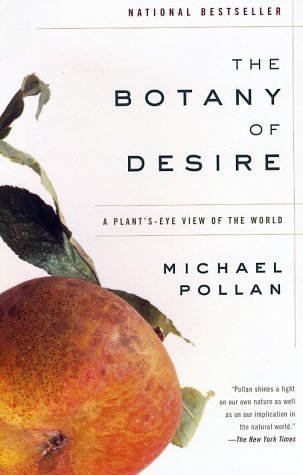 The August selection for my Stranger than Fiction book group at the Kansas City Public Library was The Botany of Desire by Michael Pollan, one I’ve been meaning to read for a very long time. From Goodreads:

Every schoolchild learns about the mutually beneficial dance of honeybees and flowers: The bee collects nectar and pollen to make honey and, in the process, spreads the flowers’ genes far and wide. In The Botany of Desire, Michael Pollan ingeniously demonstrates how people and domesticated plants have formed a similarly reciprocal relationship. He masterfully links four fundamental human desires—sweetness, beauty, intoxication, and control—with the plants that satisfy them: the apple, the tulip, marijuana, and the potato. In telling the stories of four familiar species, Pollan illustrates how the plants have evolved to satisfy humankind’s most basic yearnings. And just as we’ve benefited from these plants, we have also done well by them. So who is really domesticating whom?

I’ve been a fan of Pollan’s for years, ever since I first read The Omnivore’s Dilemma (I’ve also read Food Rules and In Defense of Food before this). The Botany of Desire has been on my list forever, so I was really excited to see it selected for book group! Unfortunately, I missed the previous month’s discussion, when we get the next book, so I had to hunt a little bit for a copy. By the time it came in on loan to my school library, I was on my Hawaii trip, and then only had two nights to read after work before the discussion. I was only 70 pages in by then… oh well! I still went to the discussion and enjoyed it, and ended up finishing the book by the end of that week.

The Botany of Desire‘s four chapters offer interesting tidbits and brief histories of these four different plants, and clearly outlines the reasons we are captivated by them. I agree plants and humans enjoy mutually beneficial arrangements, but I’m not sure I buy Pollan’s statement that “plants are using us as much as we’re using them,” since I’m sure plants would prefer NOT to be ravaged by chemical poisons and genetic experimentation. I was aware that wiping out diversity among plants what not good and mostly done to profit corporations, but Pollan really drove it home and explained exactly why diversity is a necessary, good thing in agriculture and nature.

Apple: Too much Johnny Appleseed, not enough apple. It was interesting and entertaining, but not nearly as much as the rest of the book. Lots of people get stuck on this chapter and give up. At least skip ahead to the next section, I promise!

Tulip: Wow. The Dutch were crazy about this plant! They ruined their whole economic system over it. Incredible. I wish Pollan had included pictures of the tulip varieties discussed. (Oh well, hooray for Internet! The black tulip is stunning.)

Marijuana: Fascinating, especially the war on drugs synopsis and how this plant, that has so many useful applications and is by and large incredibly safe, could be so demonized virtually overnight in the United States. Same for the people who grow/use it. I was just a little kid when it started, I remember D.A.R.E. units in elementary school and thinking they were silly.

Potato: By far my favorite chapter (kinda has to be—one of my grampas was a potato farmer, the other an Irishman!). I was blown away by exactly how horrific conditions became in Ireland due to the Potato Famine of the nineteenth century (the catalyst for my Irish ancestors to come to the States). I was really interested in the contrast between farming potatoes in the Andes vs. Ireland, and how variety and diversity makes everything better. And the farmers having to deal with Monsanto—ugh. Terrible. Frightening. I’m lucky (and make a point of it) to eat as much local, seasonal organics as possible.

While I wasn’t quite as captivated by Botany of Desire as I was by Omnivore’s Dilemma, Botany is still an eye-opening read in Pollan’s signature blend of personal and historical/factual narrative. Looking forward to reading his latest, Cooked, in the future!

4 thoughts on “the botany of desire”