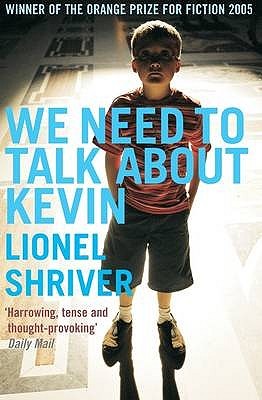 Confession: I saw the movie before I read the book. I didn’t know it was a book first when I saw the movie! So I wasn’t sure about reading Lionel Shriver’s We Need to Talk About Kevin (“why bother?”) but I enjoyed her other book Big Brother on audiobook last year (my review) so this ended up on my radar. From Goodreads:

Eva never really wanted to be a mother—and certainly not the mother of a boy who ends up murdering seven of his fellow high school students, a cafeteria worker, and a much-adored teacher who tried to befriend him, all two days before his sixteenth birthday. Now, two years later, it is time for her to come to terms with marriage, career, family, parenthood, and Kevin’s horrific rampage, in a series of startlingly direct correspondences with her estranged husband, Franklin. Uneasy with the sacrifices and social demotion of motherhood from the start, Eva fears that her alarming dislike for her own son may be responsible for driving him so nihilistically off the rails.

This book’s epistolary style shows the viewpoint of the mass murderer’s mother only, Eva. She is ambitious, pretentious, and self-absorbed, and on the other hand also self-destructive, in a way. We Need to Talk About Kevin is dense—packed with wordy, lengthy passages in which Eva dispenses family history, psychological conundrums (her own and her family members’), and visits with Kevin in the juvenile penitentiary. The first three-quarters or so is a slow, long-winding descent and the final quarter unravels it all in a satisfying literary climax (at least, I was satisfied with the end, even knowing what was coming).

It’s a really, really dark, complex, difficult subject, and fascinating to read something from the perspective of the parent of a mass murderer. They are so often demonized… even though Eva was on to Kevin’s true personality despite her husband Franklin’s utter, shocking naiveté about the boy. (I wanted to shake him and scream Open your eyes!) But I can also understand wanting to see and trust the best in your children. How do you punish your child on a hunch that they’re “bad,” with no solid proof of misbehavior? This is where Eva finds herself for 15 years.

There seem to be two camps of readers of Kevin, one that believes Kevin was born evil, and one that feels Eva’s indifferent parenting drove him to evil. For me, I fall into the former camp. Parents make mistakes, and while Eva is not exactly a likable or sympathetic character, it looked like she did what she could with her limited emotional investment in parenting to give her kids a good life. From birth, Kevin was an innate misanthrope, refusing to be physically or emotionally close with his mother, mocking (I thought) Franklin’s enthusiasm for bonding together, manipulating classmates and Franklin, and having a generally frightening attitude towards consequences, relationships, and life. He was terrifying.

We Need to Talk About Kevin is a disturbing, haunting story full of rich detail and thought-provoking subject matter. I might need to read something lighter before I delve into Columbine by Dave Cullen (sitting on my shelf waiting…), though. It was really interesting reading Kevin in the midst of an alarming gun violence trend in the United States.

6 thoughts on “we need to talk about kevin”