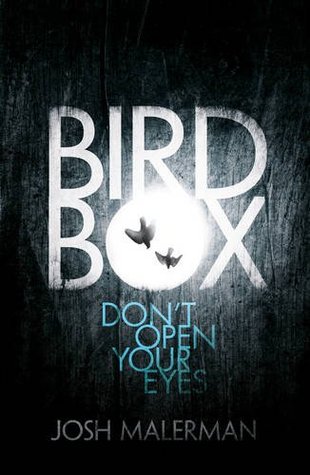 I saw a few really positive reviews of Bird Box by Josh Malerman around online and decided to give it a shot, especially after my husband was asking for scary and dark books. From Goodreads:

Something is out there…

Something terrifying that must not be seen. One glimpse and a person is driven to deadly violence. No one knows what it is or where it came from.

Five years after it began, a handful of scattered survivors remain, including Malorie and her two young children. Living in an abandoned house near the river, Malorie has long dreamed of fleeing to a place where her family might be safe. But the journey ahead will be terrifying: twenty miles downriver in a rowboat—blindfolded—with nothing to rely on but Malorie’s wits and the children’s trained ears. One wrong choice and they will die. And something is following them. But is it man, animal, or monster?

Bird Box skips back and forth through time, from the day Malorie discovers she’s pregnant and the world starts going to hell through her pregnancy when she lived with a handful of other survivors holed up in a house, to four years after her children are born and they embark on their perilous journey down the river. It’s really skillfully done, each part of the timeline just as fascinating and gripping as the other. You just HAVE TO KNOW what happens next.

Bird Box is just about everything I want in a horror/thriller book. If you need slasher-gore-fest in your horror, this is not for you (although the climactic scene near the end is more graphic than the rest of the book). Malerman deftly builds suspense with every page, proving (like others have) that what is unseen is often more terrifying than what is seen. We never get a physical description of whatever it is out there making people go insane, so my imagination went wild with that one. I loved that the reader isn’t privy to things before the characters.

I’d even call this a psychological thriller somewhat, and of course post-apocalyptic, since you don’t really know what’s the cause of all this hysteria—is it aliens? A man-made catastrophe? Environmental disaster? Who is truthful, who is lying, who can you trust in this new world? It’s a study in debilitating fear. I like zombie fiction a lot, but it was a welcome departure from the recent zombie craze, too.

You guys. I read this book in one day, almost 300 pages. Totally absorbed—couldn’t put it down. Spine-tingling terror and thrilling suspense done right. If you liked The Road and The Walking Dead you’d probably like Bird Box. Read it!