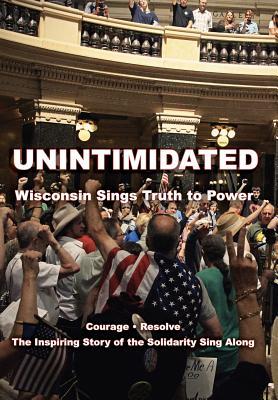 I’ve wanted to get my hands on Unintimidated: Wisconsin Sings Truth to Power for about a year now, ever since it came out as a response to Gov. Scott Walker’s book of the same title. When I was in Madison visiting my parents last month I saw they had a copy, which they let me borrow. From Goodreads:

UNINTIMIDATED: Wisconsin Sings Truth to Power is the compelling true story of the Solidarity Sing Along, the longest-running singing protest in history. Since March 11, 2011, opponents of Gov. Scott Walker and his extremist tea party agenda have been gathering in the Wisconsin Capitol in Madison from noon to 1 p.m. every weekday (over 700 straight to date call it Moral Monday through Friday). The singing protest came on the heels of huge rallies (one of at least 150,000 people) at the Capitol after Walker “dropped the bomb” (his words in secret to his Cabinet) that dealt a cowardly death blow to 50 years of collective bargaining for public workers. What followed, and still continues, were legislative assaults by the Republican majority on women, voters, teachers, renters, the poor and the working class in general.

Oh how I was dying to be at the protests! When Walker “dropped the bomb” I was so, so, so tempted to take a couple vacation days and get up to Madison as soon as I could. But I have been watching the politics in Wisconsin like a hawk for three or four years now, and I was able to participate in a Solidarity Sing Along once when I was home visiting. It was a moving, communal experience. They are still going strong today!

One thing I learned that I didn’t know about our Capitol was that the rotunda was specifically designed with the people’s voices in mind, acoustically tuned to help project from the first floor rotunda up throughout the building. It’s also so ironic that all of this was happening under a bust of “Fighting Bob” LaFollette, a Republican (!) remembered as a staunch proponent of progressivism.

Unintimidated was short, only about 60 pages, with lots of great photos embedded throughout the book, which is more like an extended essay. I was able to read it in less than an hour. It brought me right back to those impassioned feelings of community, strength, peace, and justice. If you’re interested in politics, labor, unions, and current events then this is a great read.