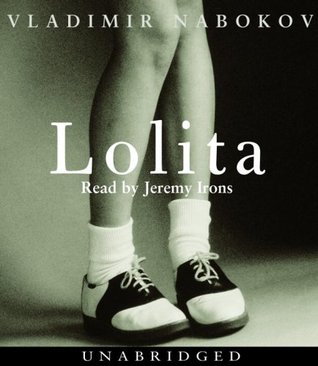 Over Memorial Day weekend I visited my folks in Wisconsin, so I had to pick out a few audiobooks for the road. When I saw this was available I thought this might be a good chance to crack a classic. From Goodreads:

Awe and exhilaration—along with heartbreak and mordant wit—abound in this account of the aging Humbert Humbert’s obsessive, devouring, and doomed passion for the nymphet Dolores Haze. Lolita is also the story of a hypercivilized European colliding with the cheerful barbarism of postwar America, but most of all, it is a meditation on love—love as outrage and hallucination, madness and transformation. With an introduction by Martin Amis.

If you’ve read my blog and comments here you will have figured out that I’m pretty gun-shy when it comes to classics, but I was definitely interested in giving Lolita a try on audio especially because of its narrator:

SCAR, you guys. Or as my husband said, “Kristin, jeez. It’s Jeremy Irons, not Scar from The Lion King. Silly.” (Although I’m kind of convinced it was actually Scar because he talked about killing his brother at one point in the novel…)

But for real, Jeremy Irons has perfect voice for the role of Humbert Humbert (and of course, he played this role in the 1997 film version—I haven’t seen it yet). Suffice it to say, dude’s messed up. He’s insufferably vile and repulsive, and a deeply disturbed individual. But between Nabokov’s writing and Irons’s delivery, I found Humbert’s view of himself fascinating. Humbert makes appeals for the readers’ sympathy throughout (saying it was actually Dolores who seduced him, but then later copping to his guilt and role in destroying Dolores’s childhood, and so on), And as “mature” as Dolores appears (according to Humbert, whom obviously we cannot take at his word), she actually is a victim—make no mistake. However, Humbert’s description twists her into an independent character with her own manipulative agenda… it’s hard to describe! His “love” for her is abhorrent, obsessive, and sick. He is the adult, she is the child, and she doesn’t know any better, maybe? But apparently she does? Wow. You are left wondering how Dolores might have felt and what she might have thought about the whole affair. All other characters are so secondary and one-dimensional, it feels like in the world of this book there are only the two of them, Humbert and Dolores (and surely that’s how Humbert wanted it).

I’m so glad I listened on audio instead of reading on paper. This would have possibly been a DNF for me on paper. I just have so much trouble getting into classics. The audio really helped propel the story for me and kept me hooked, despite the disgusting and difficult the subject matter. Nabokov’s prose in Lolita is so playful and rich, full of sophisticated word play and double entendres. I would have never guessed such a reprehensible topic could be steered by such gorgeous language. It’s clear to see why this novel endures as a classic.