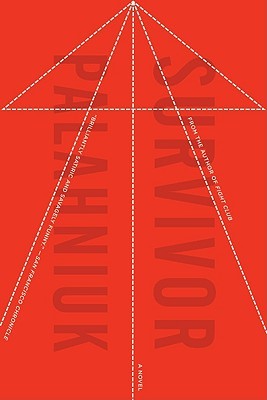 Posting this during Bout of Books 10, part of my goals to catch up on neglected reviews! On our road trip to Ohio last month, Nick and I listened to Survivor by Chuck Palahniuk on audiobook. From Goodreads:

Tender Branson—last surviving member of the so-called Creedish Death Cult—is dictating his life story into the flight recorder of Flight 2039, cruising on autopilot at 39,000 feet somewhere over the Pacific Ocean. He is all alone in the airplane, which will crash shortly into the vast Australian outback. But before it does, he will unfold the tale of his journey from an obedient Creedish child and humble domestic servant to an ultra-buffed, steroid-and collagen-packed media messiah.

I have read a few books of Palahniuk’s before several years ago—Fight Club, Choke, and Lullaby. I’m not sure I would have ever classified him as a “favorite” author, but I enjoyed the sort of unconventional shock factor and biting commentary on society in his stories. I always meant to read more, but ya know. School, other random life things, other books. Now my husband has become interested in Palahniuk’s work so I thought this would be a great audiobook for us both on the road trip, and it was!

Survivor definitely has Palahniuk’s signature style, which contributes both to it’s success and flaws, I think. Great, creative premise and attention-grabbing story. However if you’ve read his other books, the protagonist is pretty familiar: a misanthropic anti-hero, fairly bitter about life and the world, disenchanted attitude, nihilist tendencies, signature flat-delivery touch of dark humor. And on top of that, in Survivor, the plot line sort of loosely followed Fight Club, with the quirky, confusing female love interest and the rebellion from the society in which he was raised, dealing with internal (and external) insecurities, an so forth.

But while these elements are familiar, I still enjoyed it. The settings of the cult and the airplane were great and interesting! Maybe Palahniuk is an author best enjoyed in infrequent doses. I read some other reviews and people seemed to be worn out on the similarities between his books a lot. Perhaps I liked this one more because it had been so long since I read anything by him? Anyway. I also thought the narrator (Paul Michael Garcia) did a fantastic job conveying Tender Branson’s personality (or intentional lack thereof!) and diversifying each character. Recommended for fans of dark, satiric speculative fiction!