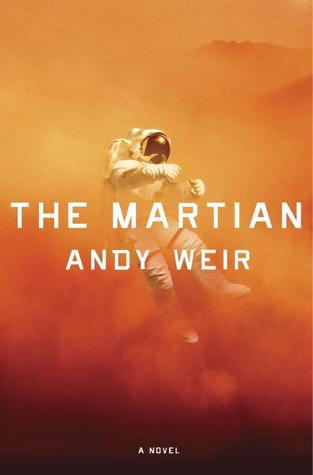 Three weeks ago I read The Martian by Andy Weir, a pre-ordered gift from Christmas that came in the mail after it was officially released mid-March. I thought it would be the perfect “published in 2014” selection for my 2014 Eclectic Reader Challenge. From Goodreads:

Six days ago, astronaut Mark Watney became one of the first men to walk on the surface of Mars. Now, he’s sure he’ll be the first man to die there.It started with the dust storm that holed his suit and nearly killed him, and that forced his crew to leave him behind, sure he was already dead. Now he’s stranded millions of miles from the nearest human being, with no way to even signal Earth that he’s alive—and even if he could get word out, his food would be gone years before a rescue mission could arrive. Chances are, though, he won’t have time to starve to death. The damaged machinery, unforgiving environment, or plain-old “human error” are much more likely to get him first.But Mark isn’t ready to give up yet. Drawing on his ingenuity, his engineering skills—and a relentless, dogged refusal to quit—he steadfastly confronts one seemingly insurmountable obstacle after the next. But will his resourcefulness be enough to overcome the impossible odds against him?

The Martian had its ups and downs for me. The good:

The not so good:

Weir did a great job of making top-shelf science talk accessible to readers unfamiliar with space travel, too, which I appreciated! The Martian was actually a very easy, fast read—if I wasn’t so generally busy with life I probably could have finished it in a weekend rather than almost a week. I think The Martian may be a case where it translates better on film, especially the last 15 percent of the book. I could NOT put it down once I hit the final chapters—totally a page-turner!

The Martian is my fourth of twelve books read for the 2014 Eclectic Reader Challenge.

9 thoughts on “the martian”