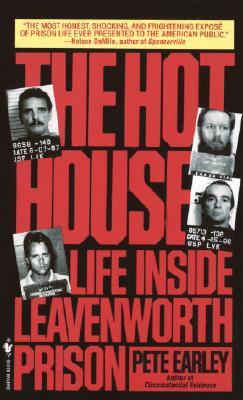 Last week I read a book I’ve been interested in for a long time, The Hot House by Pete Earley, about life in Leavenworth Prison, 1987–89. This year, I decided to add it to my TBR Pile Challenge this year. From Goodreads:

An account of life in Leavenworth Prison, based on interviews with inmates and others, describes the lives of a sexual predator, a gang member in for forty-two years, a sociopath in “no human contact” status, and others.

I have been curious about The Hot House since I first learned about it, and realized that Leavenworth Penitentiary was so close to Kansas City, where I live. I also was completely hooked on HBO’s Oz, and now feel inspired to watch the series again after reading this book.

Life in the Leavenworth is pretty much how you’d expect it: schemes, violence, murder plots, drug and weapon smuggling, drug and gambling rackets, sexual predators, inappropriate staff behavior, and more. Much of it, though, I found incredibly mind-bending, like the relationship between Carl Bowles and Thomas Little. Was it sexual? They claim not. Did Bowles brainwash Little intentionally? Certainly emotional manipulation. It was complex and disturbing.

I was also fascinated by Thomas Silverstein, arguably the most compelling subject in the book. A “no human contact” clause has been enforced for Silverstein since he killed a guard in 1983. In Leavenworth, he was confined in a tiny basement cell with the florescent lights on 24/7, only sparingly interacting with guards that despised him. When Earley interviewed him, Silverstein admitted the disorienting isolation was taking a toll on his mental state. His drawings and dreams were disquieting.

One thing I noticed was that Earley’s main subjects were all white, with the exception of Warden Matthews, who was black. There is a big subplot regarding the Cuban prisoners rioting, but for the most part minorities remain in the background. I wonder if this is because Earley is white himself? It’s pretty clear in the book that races tend to stick to themselves. Perhaps it was difficult to get close and intimate (conversationally) to non-white inmates?

Anyway, The Hot House raises tons of issues that have escalated in the decades since publication, from race relations to the effectiveness of rehabilitation programs to mental illness to the staggering, embarrassing escalation of prison stats in the United States. This book brings to the forefront a huge, complicated blot on our society deserving of attention and action.

The Hot House is my second of twelve books read for the 2014 TBR Pile Challenge.