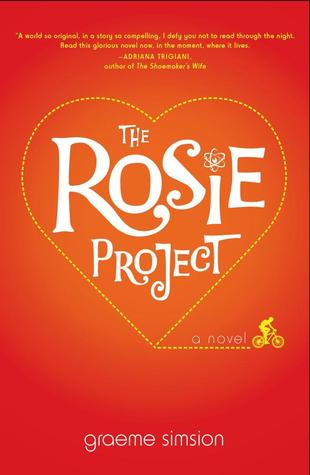 The Rosie Project by Graeme Simsion landed on my radar after many rave reviews across the book blogs in the last year, but in general I’m not much attracted to romantic comedies. When I saw that Katie at Words for Worms is making it one of her Fellowship of the Worms features, then the ebook version of this one came up for just a couple bucks online, and “romantic comedy” was a genre for the 2014 Eclectic Reader Challenge, AND the KC Library’s 2014 Adult Winter Reading program theme is humor, I thought I had to give it a try. From Goodreads:

Narrator Don Tillman 39, Melbourne genetics prof and Gregory Peck lookalike, sets a 16-page questionnaire The Wife Project to find a non-smoker, non-drinker ideal match. But Rosie and her Father Projectsupersede. The spontaneous always-late smoker-drinker wants to find her biological father. She resets his clock, throws off his schedule, and turns his life topsy-turvy.

Welp, turns out I was right about myself and romantic comedy is just not really my thing. The Rosie Project is a cute, quick read, and I enjoyed a few chuckles here and there, but overall I thought it was a bit formulaic and predictable. With the few chuckles came as many (or more) groans. I was uncomfortable with how Don seems to not be aware he has Asperger’s (or is on the autism spectrum). I found that really strange and just way too unlikely to fully suspend my disbelief. Don is 39 years old, intelligent, educated (in genetic science, no less!), seems to care about his health, has seen therapists, has researched and given lectures on Asperger’s… really? His own mental health disorder (autism or otherwise) has gone undiagnosed? The other thing that bothered me is that Don was described as being “quirky,” “wired differently,” “an expert at being laughed at.” I don’t know. I guess this kind of glib characterization of complex mental health disorders stuck in my craw.

The rest of the characters were pretty one-dimensional to me. Gene and Claudia were okay, but the portrayal of academics was sadly clichéd. Rosie, Don’s love interest, was predictably his polar opposite and ridiculously shallow to boot. I didn’t like her much. hover-over spoiler here. I have to admit I became bored around 60% in, and probably would have given up if not for the positive reviews all over the place and the challenges/discussions involved. The more I’m thinking about the book for this post, though, the less positive I feel about it 😦 I wonder if I would have liked this more if Don had been diagnosed, and having an autism disorder would have been a real part of the story rather than “Oh he’s just unusual and idosyncratic!” There was huge potential here that sadly went by the wayside.

I understand why The Rosie Project is a big hit, though—turning the typical romantic comedy on its head by featuring a male protagonist rather than a female one, the whole quest to discover Rosie’s biological father was fairly compelling, and it’s ultimately an unchallenging, feel-good novel. A fluffy rom-com film adaptation is inevitable, no doubt. Although I’m definitely in the minority on my feelings about The Rosie Project, I’m glad I read it to get out of my comfort zone for the Eclectic Reader Challenge and I look forward to discussing it more with the Fellowship of the Worms soon!

The Rosie Project is my romantic comedy for the 2014 Eclectic Reader Challenge, and marks 1 of 12 completed on the list.

11 thoughts on “the rosie project”