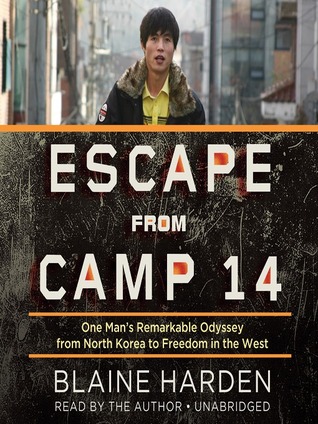 Catching up! I listened to one last audiobook after I returned from Wisconsin over the holidays, Escape from Camp 14 by Blaine Harden. I was interested in this because I have a cousin teaching in South Korea right now, and it occurred to me how close she is to this world. From Goodreads:

North Korea is isolated, hungry, bankrupt, and belligerent. It’s also armed with nuclear weapons. Between 150,000 and 200,000 people are being held in its political prison camps, which have existed twice as long as Stalin’s Soviet gulags and twelve times as long as the Nazi concentration camps. Very few born and raised in these camps have escaped, but Shin Dong-hyuk did. In Escape from Camp 14, acclaimed journalist Blaine Harden tells the story of Shin Dong-hyuk and, through the lens of Shin’s life, unlocks the secrets of the worlds most repressive totalitarian state.

Escape from Camp 14 was a pretty quick listen—just about 5.5 hours—but there’s a lot of information about the horrors of growing up in a North Korean political prison camp. Usually news stories coming out of North Korea are about its leadership or nuclear weapons—rarely (if ever) anything about these camps. I admit I had no idea how similar the camps are to Nazi concentration camps of WWII. Shin’s story is a perfect example of how total oppressive control can shape people, from stealing, lying, snitching, every-man-for-himself attitudes, and even looking at your own family as competitors for food. It’s incredible that he really did not know anything of the world beyond the camp’s walls.

Shin’s experiences in the camp are often gruesome, truly a kill-or-be-killed kind of place, and on a logical level I completely understand why he would behave the way he did in certain situations (eat rats, fight for a grain of rice, etc.), but I had trouble feeling empathetic (which sounds horrible). I think that may be due to the clinical writing style and straight-forward delivery of the narrator (author Blaine Harden). It just lacked emotion for some reason… possibly because Shin himself lacked emotions for so long? I’m not sure.

Still, Escape from Camp 14 is an excellent place to start if you want to know more about North Korea. It does make me wonder why, while we can see these camps clearly on Google Maps and know what’s happening, little is done to change the situation. It was inspiring to hear about how Shin took matters into his own hands to get out, though. The world is indeed a complicated and unfair place.