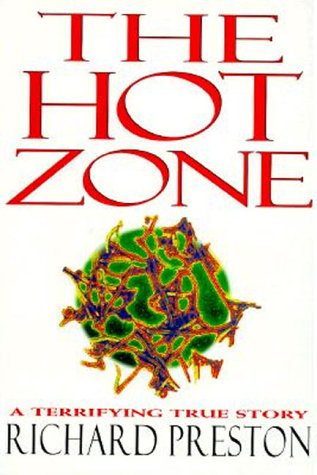 This month I finally got around to reading The Hot Zone by Richard Preston, which I borrowed from a family member back in July. From Goodreads:

A highly infectious, deadly virus from the central African rain forest suddenly appears in the suburbs of Washington, D.C. There is no cure. In a few days 90 percent of its victims are dead. A secret military SWAT team of soldiers and scientists is mobilized to stop the outbreak of this exotic “hot” virus. The Hot Zone tells this dramatic story, giving a hair-raising account of the appearance of rare and lethal viruses and their “crashes” into the human race. Shocking, frightening, and impossible to ignore, The Hot Zone proves that truth really is scarier than fiction.

Oh boy, where to begin. I meant to get started on this one for Halloween but was a little too busy that week (normal 40-hr work week, then rehearsals/concerts/meetings every night after work) so didn’t get to it until the weekend after. That’s okay, though, because it still scared the bejeebuz out of me!

Right away, The Hot Zone catches the reader’s attention with a horrifying story about a possible “patient zero,” who basically bleeds out over a very short period after exposure. But… it’s a lot more disgusting and disturbing than that, of course. The Hot Zone focuses on the history of the Ebola virus, and outbreaks in Africa and an isolated incident outside Washington DC in the 1990s. I knew Ebola was bad and you don’t want to catch it (obvs), but not any of the details of what exactly happens to an infected person (or animal)—bleeding out from all orifices and your insides liquefying. UGH! <shudder> Although, The Hot Zone isn’t as gory as I expected after the first vignette on “patient zero.”

I think what shocked me the most was probably the carelessness—well, that might not be the exact right word. I don’t think the scientists in the book were careless. The Washington DC operation was noted as a first-of-its-kind mission. But this patient zero who was starting to exhibit these inexplicably horrifying symptoms was put on an AIRPLANE?? How many accidental needle pinpricks are really possible in the extremely contagious conditions described? Oh, and the poor monkeys. This is not a book for people sensitive to reading about animal testing. There’s a lot of sick monkeys in The Hot Zone.

A weak point of The Hot Zone for me was the slightly dry writing style, which became slightly repetitive in a few spots. I really liked it, though. If I hadn’t been so generally life-busy I probably could have read this in just a couple of days—a compulsive page-turner, definitely. Scarier than any fictional plague or virus book I’ve come across. I caught myself holding my breath during some parts!