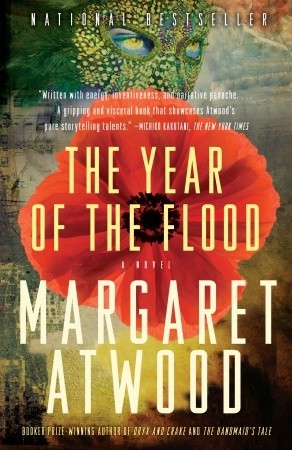 Catching up on my book reviews this week! Late last month I read The Year of the Flood by Margaret Atwood, the second in her dystopian MaddAddam triology. From Goodreads:

Set in the visionary future of Atwood’s acclaimed Oryx and Crake, The Year of the Flood is at once a moving tale of lasting friendship and a landmark work of speculative fiction. In this second book of the MaddAddam trilogy, the long-feared waterless flood has occurred, altering Earth as we know it and obliterating most human life. Among the survivors are Ren, a young trapeze dancer locked inside the high-end sex club Scales and Tails, and Toby, who is barricaded inside a luxurious spa. Amid shadowy, corrupt ruling powers and new, gene-spliced life forms, Ren and Toby will have to decide on their next move, but they can’t stay locked away.

I listened to Oryx and Crake on audio (my review) over the summer and fell in love with the story. I didn’t even realize it was part of a series until later when I added it as “read” on Goodreads! I knew I had to read Year of the Flood and pre-ordered MaddAddam not long after finishing O&C.

Year of the Flood didn’t quite have the awe-striking impact on me that O&C did, and I think that’s because I already knew what was coming, and I struggled once in a while with the timeline alternating between narrators and times. But, I did really enjoy it because it was seeing another side of this incredible world that Atwood created. O&C built the world and explained the circumstances, Flood showed us more how people really lived in it. I sort of had trouble with how convenient it seemed that many of the characters from O&C had past connections to Flood characters—I think it just shrunk this world a bit for me when I found out Ren knew Jimmy from before the apocalyptic event, for example.

The religious cult, God’s Gardeners, was fascinating and terrifying to me. Adam One and his incredible power of persuasion and hold over his followers really creeped me out. Atwood uses religious themes in her books and I think in this case it was especially effective. The hymns… ironically, as a musician, I had trouble hearing melodies in my head as I was reading them, so I read them more as poetry and that way, without music, they came off a little hokey to me (and I admit I sort of skimmed them a bit).

I think the best part of Flood though is that it is driven by female protagonists, all vastly different personalities. Toby was my favorite—smart, quietly strong, and protective. Ren was more delicate, younger, naive. The two were actually a nice match for each other. They both overcame situations of sexual assault, which is another underlying theme in the book. There’s also Pilar and Amanda, two other kickass women in Flood, who play large roles in both Toby and Ren’s lives. I actually liked Jimmy in O&C but this other view of him from the women was illuminating on his character.

Overall I really loved seeing the seedier side of life “on the streets” in Atwood’s dystopian future. Not sure I could classify Flood as a pure stand-alone novel though, the way O&C certainly works well by itself. It made me want to go back and re-read O&C, and I can’t wait to start MaddAddam soon to find out the end of the story!

6 thoughts on “the year of the flood”

Leave a Reply to Words for Worms Cancel reply